Family pet did not sign up for this 'guard dog' shit

A LABRADOR was shocked to discover he is expected to be a professional security guard as well as a lovable family pet.

Friendly dog Bobby became alarmed after hearing his owners clearly state that as well as being ‘great for the kids’ he would ‘tackle any intruders’.

Bobby said: “I was like, ‘whoa, let’s rewind that’. I thought my job was to chase balls and get fussed over. No one said anything about going toe-to-toe with hardened criminals.

“This definitely wasn’t mentioned when they chose me at the kennels and I’ve not even been issued with basic equipment like a torch and a radio.

“I’ve had no unarmed combat training and a burglar could be a young, fit guy with a history of violence. He might have a knife, or at least a screwdriver. Christ, I feel a bit sick now.”

Bobby added: “I tried to explain I needed some form of personal protection, ideally a taser, but they didn’t understand and just gave me a chew that promotes dental health.

“If someone breaks in I’ll hide in a bedroom and try to dial 999 with my nose. That’s not being a coward, it’s just following police advice. You can replace a Macbook, but you can’t replace a dog.”

Bobby’s owners later discussed the very low risk of crime in their area, but he was in the utility room having nightmares about a wiry, tattooed man with a working class accent. 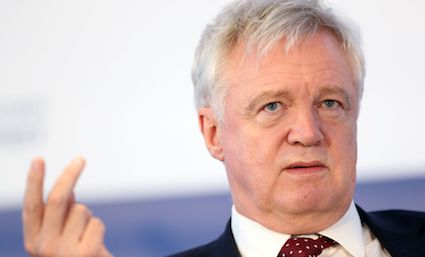 BREXIT minister David Davis will retire before 2019 because he fancies buying himself a nice place in the sun.

Davis, who has been expertly guiding Britain’s divorce negotiations with the EU by repeating the same thing for five months, admitted he has narrowed it down to the Algarve, or possibly Malta.

He said: “It’s just so much more civilised in Europe. Nobody raises an eyebrow when you order a bloody Mary with breakfast.

“France is out, because I don’t want to have to deal with all the refugees fleeing through the Channel Tunnel, and Greece is out because that’s going through all the same bankruptcy-by-EU stuff as Britain, only not quite as badly.

“Basically I’m looking for good weather, proper healthcare, a decent standard of living and a population who aren’t credulous, racist morons spoiling for a fight.