Everyone’s saying that the most likely outcome of the vote today will be a hung parliament, and that David Cameron will probably do loads of dirty tricks to keep me out. Harriet reckons I’m going to have to challenge David and his crew to fisticuffs in the street if he won’t budge, which is all very worrying because what about when nasty old Ed Balls starts raining down punches? And knowing Michael Gove he’ll have some sort of concealed weapon about his person. Douglas Alexander and me are totally shitting it.

OMG YAWN! I can’t think of anything more BORING than a general election, except the Olympics perhaps, and at least that has a decent theme tune. The only good thing about all this endless discussion about policies and issues and the NHS, whatever that is, is that school is closed today for polling and I get to go to my granny’s house and watch Labyrinth and eat beef Monster Munch. Tomorrow the only novelty will be a slightly different set of annoying grown-ups in suits making the same pointless rules, shouting the same meaningless nonsense on the telly and the mums can finally all get back to talking about Strictly.

Sturgeon: England has no need to fear my reign of fire and blood 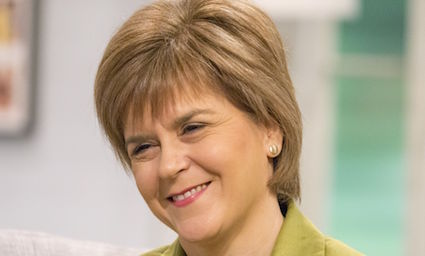 By Nicola Sturgeon, leader of the Scottish National Party

THE SNP is the third largest party in the UK, and a dominant political force. Yes Keir, it is possible.

Some say this will cause the biggest constitutional crisis since the abdication. But I say to English voters that, as long as they do not value their lives in any way, they have nothing to fear.

Certainly we will seek concessions from the government in power, whether on Trident, handing over your children to work in our call centres, or health spending.

And while we continue to pursue a second independence referendum, the rolling terror of the next five years which will reduce England to a silent, empty land of ragged ghosts, means it will not be a priority.

The face of British politics is changing and my face – flecked with blood and riding a battle stag as I order Hadrian’s Wall rebuilt with skulls – only reflects that.

Together we can make Britain better, as long as you agree that anywhere is better without the English.

Have a lovely day.