Dear Holly,
Last weekend I was on a night out with the girls to celebrate my 36th birthday. Clad arse to tit in neon lycra, I must have cast a highly alluring shadow across the dancefloor as I limboed to Britney Spears, because next thing I knew, I was on all fours behind a skip being pummelled vigorously from behind by some random teenage drunkard. Hardly noticing that I was kneeling in a spilt cocktail of urine and vomit, I panted like a spaniel with heatstroke as he shot his load across my back and staggered away. The problem is that since this brief encounter, I've developed a rather embarrassing condition whereby my clacker is itchier than a vagrant's arsehole. Can you suggest why this might be?
Sue
Penzance

Dear Sue,
Hasn't your mummy ever warned you that boys are dirty and you should stay well away from them? They are made of frogs and snails and puppy dog tails. Once, an older boy from my school picked up a big dry piece of dog poo with a stick and threw it at me, and it got caught in my hair – my new princess clip was ruined! I was forced to get my revenge by telling my mummy that he trapped me in the art cupboard and put the end of his willy in my mouth. Guess what? He got taken away from school the next day and mummy says he's gone to a place where he can't hurt little girls anymore. I feel a little bit naughty for fibbing, but I bet he rues the day he flung a jobby at me.
Hope that helps!
Holly 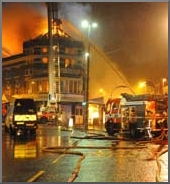 PRIVATE schools could lose their charitable status if they keep producing members of parliament, it emerged last night.

Despite targets to reduce alumni who end up ejaculating taxpayers' money onto a rent boy's face, private schools are still failing to meet their 20% 'non-shit' quota, according to the Charity Commission.

A spokesman said: "The tax breaks are based on them benefitting their communities in a variety of ways, not just keeping chinless brats regularly sodomised for six years.

"Ultimately we have to ask if it's right that the country continues to subsidise the education of a steady succession of halfwit bastards who then go on to become heavily subsidised MPs."

According to the commission one private school in Hertfordshire has produced two home secretaries, one chief whip and two dozen back-benchers in the last 20 years. The spokesman added: "That's a staggering number of publicly-funded, soul-sucking ball-tuggers."

Schools secretary Ed Balls said: "The fact that 85% of MPs are privately educated is a total coincidence, as I was telling Bodger, Biffy and Two-Pants Patterson just the other week."

Denys Ffinch-Hatton, headmaster of D'Arcy Bassington Academy For Boys in Knutsford, said: "We allow local children access to the swimming pool once a month, slightly more during the summer when the algae builds up, but when times are hard they need all the nutrition they can get their lips on and we get a lovely, clean pool."

He added: "They're always welcome to pluck our grouse and strangle a few rabbits for us, and I know many parents see the deflowering of a local village girl as an essential rite of passage for their aspiring member of parliament."