The Mash guide to snake vs crocodile

A BLOW-BY-BLOW account of the reptile battle that has captivated the internet.

The struggle between an anaconda and a crocodile in a Queensland Lake has captured the public’s imagination in a way no story about war or famine ever could.

Experts from the Institute for Studies were on hand to document the brutal majesty of two things that are quite like dinosaurs having a fight.

The snake is basking in the lake, minding its own business. It seems at peace, like a martial arts master. But here comes a bunch of young male crocodiles, drunk and looking for trouble and teasing the snake for not having any legs. The snake ignores them but they just won’t leave it, these crocodiles have got something to prove.

The cockiest crocodile oversteps the line by biting a chunk out of the snake’s arse, or more technically its rear end. The snake immediately coils around it like a massive Slinky spring. The croc’s jaws are pinned shut so it balls its stumpy claws into fists and starts punching the snake which has no effect. Then it starts kicking the snake in the side with its little legs – also ineffective. At this point the crocodile is pretty much fucked.

The snake dislocates is massive jaws and swallows the crocodile whole in a disgusting act of gluttony that makes onlooking birds retch. However the size of the crocodile is such that the snake’s skin is stretched absurdly tightly and it looks like a crocodile covered in snakeskin. So the snake does now kind of have legs, an irony which is probably lost on the crocodile as it is slowly but inexorably digested. 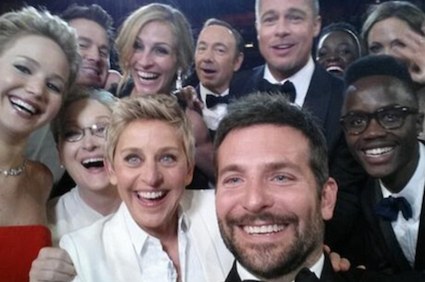 MERYL Streep has become the first person in the historic ‘Oscars selfie’ to fall victim to its curse.

Moments after the photo was taken by host Ellen de Generes, scientists warned that all those pictured would die in a bizarre way.

Three-time Oscar winner Streep became the first victim last night when she returned to her Malibu home to find it full of bats which, according to friends, then ate her.

De Generes dismissed claims of a curse ‘on the advice of her lawyers’, but sources close to the comedian claim she will never again be in the same room as anyone else in the photo.

A insider said: “Ellen is hoping the curse will focus its energy on Brad and Angelina as they are the biggest prizes.

“That should give her, Spacey, Roberts, Lawrence, Channing Tatum, Bradley Cooper, Lupita Nyong’o and her brother enough time to get their affairs in order.”

Meanwhile, Kevin Spacey’s agent has been told to go to a remote part of the California desert where he will find a cardboard box just big enough to hold a human head.