When to opt out, by David Cameron

DON’T get me wrong: the Tory party loves nothing better than a spot of light titillation.

But it’s all about knowing when to draw the line, and I can appreciate that for you people this might seem like a horrid, baffling minefield.

For example, it’s a rainy Tuesday and your wife has gone to the kitchen to prepare the family meal. You casually flip over to Channel Four for the news, but have mistimed and find yourself watching Hollyoaks. Relax, this is a perfectly healthy pastime for an adult British male – as long as you keep one foot on the floor at all times. The only exceptional circumstances are if you get cramp or your wife decides to do the hoovering. It seems obvious after someone’s explained it, doesn’t it?

Let’s up the game: you’ve decided to broaden your knowledge of the Roman Servile Wars by watching Spartacus: Gods of the Arena on Netflix. It’s perfectly natural you should want to do this. Just know that you must never do it during office hours while in my chair and wearing flip-flops. That is absolutely disgusting and if you’re not careful, you’ll end up succumbing to the evil diabetic scourge like everyone else with that level of web clearance.

Opt In is there for your protection, to give you a window to question whether you really want to commit to this uncharted course you’re about to launch yourself on. And it’s a concept you can apply to all areas of life. Next time your nephew offers you a shot on his space hopper, or you’re removing some hot pittas from the toaster with a knife, pause and ask yourself: “Could I better serve the Commonwealth in some other way?” Imagine what you could achieve if you opted out once in a while. Become a formula one magnate? Take a starring role in Eastenders? Top the charts with the pop group, INXS?

Look at the great men of Britain today  Mark Cavendish, Sir Bradley Wiggins, Chris Froome. They embraced the spirit of Opt Out at an early age. Instead of staying up late on a Friday night to pester themselves during Eurotrash, they opted to leap upon their bikes and pedal furiously to victory. You’ll recall that under Labour the only reason British men made the headlines with their bicycles was because they were having sex with them. Under the coalition, that wretched chap could have been the one wearing the yellow jersey and cruising smoothly under L’Arc de Triomphe, no-handed – like a real champ. 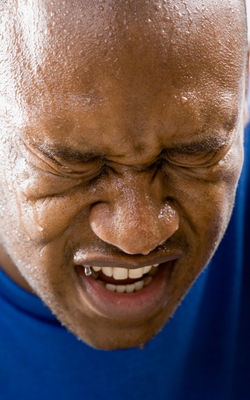 YESTERDAY’S 24-hour heatwave claimed the lives of nine men who were overwhelmed by sex thoughts.

The victims died of cardiac arrest after their bodies were unable to divert blood from the heart, to the groin and back again within a single day.

Coroner Julian Cook said: “Hot weather, with its attendant summer dresses and compulsion to reproduce, can reduce even the most cultivated human male to a slavering beast who should not be allowed on public transport.

“Men are currently in a weakened state, both mentally and physically, following the recent extended spell of sunshine. For these nine males, yesterday’s weather represented one boner too many.”

He added: “We are pitiful creatures who really should be living in caverns.”

Emma Bradford’s husband Stephen was one of the victims. She said: “He told me, ‘I don’t want to go to work today, it’s sunny and that makes me go weird. Can’t we just lie around doing it?’

“Stephen was an essentially decent person whose Achilles’ heel was less of a heel and more a penis.”