UN issues list of books it is probably okay to burn

Officials urge Koran burners to switch to Peter Benchley’s Jaws and the novelisation of Cocoon. 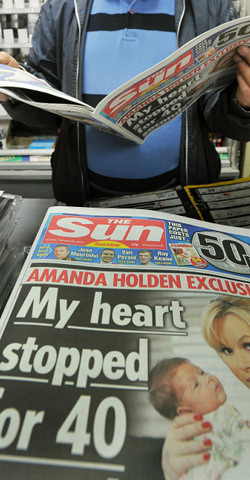 BRITAIN has warned Rupert Murdoch not to put a baby story on the front page of a Sunday tabloid ever again.

As the nation sampled News International’s weird excuse, millions of readers searched through the Sun on Sunday with increasing panic for a quadruple page spread about a famous man who paid dirty women to join him in an afternoon of drugs and fucking.

According to early estimates the paper disappointed more than three million people who had hoped for a quick return to the thrilling tales of vileness that punctuate their pointless, shabby lives.

Tom Logan, from Hatfield, said: “When I read the headline ‘My heart stopped for 40 seconds’ I assumed I was in for a Frank Bough-like extravaganza of nauseatingly sordid over-indulgence.

“Instead it was Amanda Holden. Talking about her baby. On a Sunday.”

Roy Hobbs, from Doncaster, added: “I understand this gentler approach is supposed to appeal to my wife. Just so as Mr Murdoch is up to speed, I only got to read the News of the World after my wife had read it first. She liked to smear Nutella on photographs of footballers who had been accused of sex crimes and then lick it off.”

Sheila Hobbs said: “I’m sorry that Amanda Holden had a difficult birth. Actually I’m not. I’m completely indifferent. What I want to know is whether the child was conceived in a tawdry fashion or whether she reckons the father is either Vinnie or Aled Jones.”

Meanwhile, executives at the Guardian stared in the mirror and realised they had played an absolutely pivotal role in helping Rupert Murdoch sack hundreds of workers and then launch a Sunday newspaper that will make even more money than the last one.