Are you drinking enough red wine in the morning?

DRINKING three glasses of red wine a week is good for your health, according to new research. Functioning alcoholic Donna Sheridan gives her misinterpretation:

You know when you feel like shit in the morning? That cannot be good for you. Take the edge off a busy day with a large glass of red left to breathe overnight on your bedside table. You’ll feel more relaxed and you won’t be as impatient with the kids.

Drink driving is illegal, but because red wine is officially medicine then it’s exempt. Sip a big glass as you go and the stress of the traffic will melt away, lowering your blood pressure and allowing you to go faster so the kids get there sooner and learn more.

Zoom meetings only really involve sitting still while not looking obviously drunk. A 250ml top-up Merlot will make you passionate to the point of incoherence about marketing bullshit. You’ll seem quite the professional.

It’s important to eat properly at lunchtime to avoid a ‘sugar crash’ in the afternoon. Luckily red wine is full of carbohydrates, so finish off the bottle and open a new one. You won’t care about what you actually have for lunch either. An avocado with the skin still on is organic, nutritious and goes down smoothly.

Have a productive afternoon

Afternoons can be quite boring. A nice Rioja is the perfect accompaniment to domestic chores, probably because of the tannins. Remember to reply to work emails in between watching The New Avengers on ITV4 and snoozing on the sofa.

They’re making some fuss about not being picked up, but once your kids are home and fed it’s time for a large Malbec and some quality parenting. The wine will unleash your creativity as you invent a soothing, slurred story about Nobby the Goblin who lives in Goblinland. Then once they’re tucked up? It’s wine o’clock!

Why it's illegal to be white in Britain: John Cleese investigates 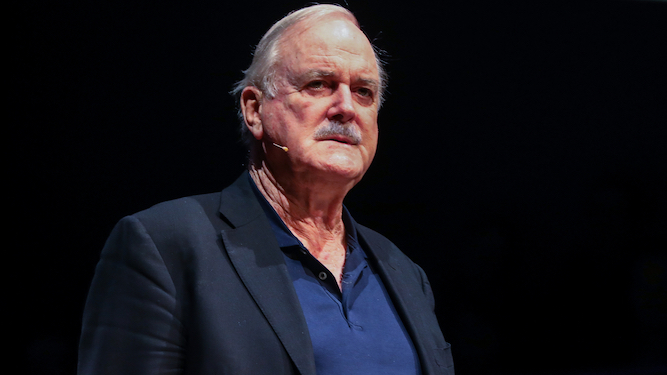 In an investigation for Channel 4, commissioned by aging white men terrified for their very lives, I aim to discover how being white became a crime subject to the ultimate penalty – cancellation.

Follow me into the leafy, suburban ghettos where whites have been exiled to, scratching out their six-figure salaries, struggling to understand why they have been banned from even proclaiming their lives matter.

One man gives me a chilling insight into Britain’s treatment of Caucasians, sharing a story about an NHS form that provided no ‘White English’ option in its nationality section until he looked a second time.

Another tells me a harrowing tale about being cautioned by the police. His only ‘crime’? Spray painting racial slurs on the window of a Londis while humming God Save the Queen.

Later, I take on the London’s politically correct workerati, and demand to know how they expect comedy to function without key tools of the trade like racism, men dressing as women and casual blackface.

And finally I ask, if it’s illegal to be white why haven’t I been arrested? How are the cancelled still here, walking the streets? How can a man such as I, with a finely-honed eye for absurdity, be spouting this nonsense with a straight face?

Then I do the Ministry for Silly Walks and ruin that as well.