The pros and pros of daytime drinking

FEW issues divide Britain more than daytime drinking. Some say there’s nothing better; others believe it’s the greatest thing ever. We examine both sides:

PRO: You’ve got the whole day ahead of you and it’s only going to get better

That sense of blazing optimism about how the afternoon is going to go is well-founded. Don’t listen to that miserable voice reminding you last time you were sick in the park at 4pm and a goose chased you. Quaff on!

PRO: You’ve got the pub practically to yourself

Most people are too hamstrung by caution to start drinking at noon on a weekday so the pub is your manor and you and your pals its jovial lords and ladies, with the staff swept along in your infectious enthusiasm for sinking gallons of wine while the sun shines.

PRO: Other poor mugs are working

They’re chained to laptops while you’re carefree as long as you go for a slash every 35 minutes. And to make it still better, you actually should be working yourself but what’s a bollocking from your boss while there are beers to be sunk?

A big fight with the Auld Enemy doesn’t come along that often, and if you drink six beers between 5.30pm and kick-off you’ll be spannered. A long, slow eight-hour approach allows you to cocoon yourself in amber alcoholic warmth, ready to stamp the bastards flat.

Once you’re in your 70s you’ll be taking a pre-elevenses sharpener daily to calm yourself after you’ve read and believed the Daily Express, so get in practice now.

PRO: It’s good for you

Unlike desperate, seedy late-night drinking in darkened homes, daytime drinking is sociable, convivial and perfectly safe. Serious boozers don’t order prosecco in an ice bucket, so you can get leathered and feel good about yourself. The prosecco will help. 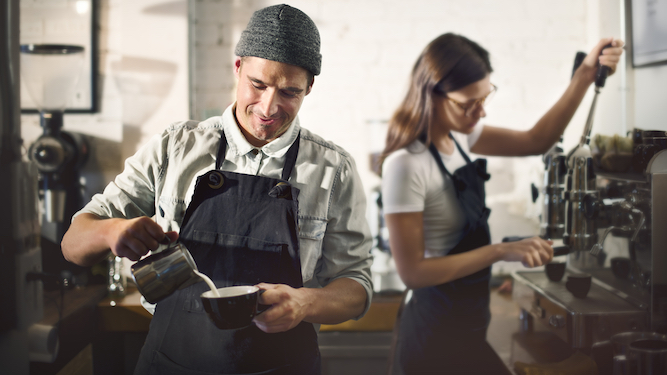 BRITONS have been informed that mere labouring for long hours in precarious jobs for minimum wage does not entitle them to call themselves ‘working class’.

Experts have explained to young people, people of colour, women, foreigners and southerners that just because their jobs could not be worse nor their wages lower does not mean they can use the hallowed epithet of ‘working class’ to describe themselves.

Julian Cook, author of Old, White and Living In Barnsley: The English Working Class, said: “The very fact that these people are working at all makes them suspect. The truly authentic working classes are for the most part retired.

“When we say working class we mean salt-of-the-earth types who trod the cobbled streets of the 1950s to work in factories and are too busy scrubbing themselves in tin baths to think about identity politics and feminism.

“Some of these people claiming to be working class have fancy jobs like barista, sandwich artist and care worker. Well you don’t come home with a dirty face from those.

“The real working classes, from mines, steel mills or Sunderland, have earned their right to be reactionary, Brexit-supporting Boris Johnson admirers. These others are nothing but arrivistes.”

22-year-old delivery driver Ryan Whittaker said: “I hoped I might be working class, because they count. But I ate an avocado once so I’m urban metropolitan elite.”