WAYNE Hayes, a middle-aged sales executive from Carlisle, has expressed regrets about the Olympics closing ceremony beamed directly from his brain. Hayes, who organisers deemed to be the most typical man in Britain, curated the ceremony via special electrodes attached to his head which fed details of everything he likes into a giant computer. This information was then transmitted into the Olympic Park in the form of incredibly lifelike holograms.

Hayes said: I thought that everyone loves a bit of Annie Lennox and Oasis to get themselves in the party mood but judging by the four hundred thousand death threats on my Twitter feed this morning, apparently not.

All I wanted was to recreate the brilliant spectacle of an early 1990s Brit Awards show and I tried to do that by free associating acts with the first words that came into my head, hence Fatboy Slim/octopus, and Annie Lennox/Viking boat.

Many of the performances last night were clipped versions of well known songs, mainly because Hayes could not remember all of the words, and the only modern acts were the ones he last heard blasting out of his daughters bedroom.

Hayes wife has asked him to explain why he is so obsessed with Jessie J, a constant feature of the concert who remained in the corner of the viewers screen like somebody signing the program for the deaf had decided to abandon waving their hands about and start shouting along instead.

Other baffling performances included Kaiser Chiefs singing The Who, because Hayes remembered liking the group but couldnt remember how any of their songs went, and a recreation of an Only Fools & Horse scene because he had their DVD on in the background at the time.

Hayes said: This is just what music concerts look like in my mind, although admittedly the last one I actually went to was Travis at the Birmingham NEC in 1999.

“Oh, why didnt I have Travis on instead of the Spice Girls? Thats a shame.

It’s actually not that big a deal, everyone reminds Bolt 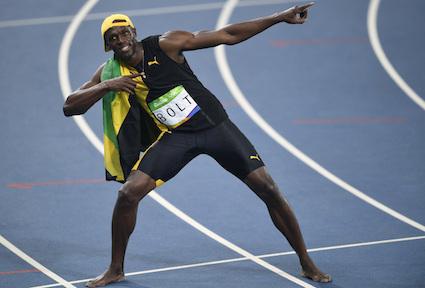 RUNNING very fast is not that impressive, Usain Bolt has been reminded.

As the Olympic sprint champion declared himself better than chips stuffed with mayonnaise, millions suggested he might want to try composing a symphony.

Bill McKay, from Peterborough, said: “Running very fast is quite good, but it’s not exactly Beethoven’s Ninth. That took fucking ages. And he had to learn how to play the piano first.”

Helen Archer, from Stevenage, added: “Usain Bolt just ‘practices’ running every day and, one assumes, eats a lot of macaroni and stays off the tabs.

“The Pope should commission a new ceiling from him. Let’s see what that does to his ego.”

Professor Henry Brubaker, of the Institute for Studies, said: “We’ve comprehensively devalued the word ‘genius’ so we may as well do the same to ‘legend’.