SATELLITE broadcaster Sky’s increasingly monopoly on quality TV drama could force many middle-class homes into the murky terrain of dish ownership, it has been claimed.

Architect Julian Cook said: “The launch of Sky Tasteful has serious implications for me and my family.

“Whenever we have people over for dinner we love to theorise about the parlous state of British TV drama, and how the vestiges of the class system prohibits the BBC from ever doing anything with as much funky swearing and blackness as The Wire.

“But if Murdoch’s new venture is going to potentially put my dinner guests several seasons ahead of me on Steve Buscemi’s latest work there’s a serious possibility that I may not be able to convince them I’m clever.”

He added: “It’s a nightmare that I’ll have to subscribe, not only in term of class semantics but also because I’m passionately convinced Rupert Murdoch is the devil. Although if pressed I would be forced to admit I’m not entirely sure why.

“Possibly something to do with Israel.”

A Sky spokesman said: “With an ‘upscale’ target demographic in mind, Sky Tasteful’s receiver is not traditionally disc-shaped. It is in fact disguised as a wheel of expensive Brie-like gooey cheese labelled ‘Le Coquillon’.

“Of course you’ll still have to explain why you’ve got cheese on your roof, but that’s your problem.”

Crime map to keep you nice and scared 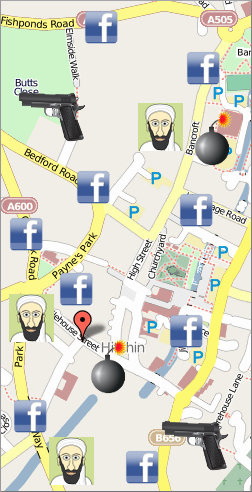 THE government has unveiled a street by street crime map of the UK as part of a new initiative to keep you nicely terrified.

To
make it as easy as possible to scare you the maps will feature guns,
old fashioned cartoon bombs, big scary knives and men in turbans, as
well as pinpointing millions of suspected kiddie-fiddlers using the
Facebook logo.

“These
maps will show that even if there is not a horrible crime
in your street, something incredibly disturbing will have happened
within five minutes walk.

“But it’s okay because I am here to
tell you that I am going to protect you. In meantime why not ease the
stress of being under constant threat of death or molestation by using
your credit card to buy a shiny thing?”

May said the maps would
also be available as a smart phone ‘app’ so that busy professionals
could be paranoid and fearful between meetings.

She  added: “When
you meet someone at a party you can ask what street they live in and
then nip to the loo with your iPhone before rejoining the conversation
and trying to work out whether your new acquaintance is a terrorist, a
fraudster or a predatory sex beast who is probably going to follow you
home.”

Meanwhile experts noted the map showed only three cases of
serious theft in central Westminster, but May stressed there was no
need to log those instances where MPs had given back some of the money
they had stolen quite deliberately.

Taxi companies have also
welcomed the maps with some planning to use them on terrifying leaflets
that will be handed out in pubs to women and weedy men with spectacles.

Bill
McKay, owner of CabCars in Stevenage, said: “These days with money a
bit tight a lot more people are choosing to walk home or get a dangerous
bus full of maniacs that will only take them to end of their maniac
filled street. This will help enormously.”

Tom Logan, from Finsbury Park, said: “I really like living here so it’s good that the government’s ruined it for me.”