The channel, which is popular with drunkards and men lying on hotel beds at night, regularly updates its models’ jiggling techniques to keep things fresh for viewers.

Each batch of jiggles has a theme – past examples including  ‘Endangered Species’ and ‘Heroes of the Industrial Revolution’ – the most recent being inspired by International Women’s Day, which is a global event encouraging appreciation for women’s social, economic and political achievements.

A Babestation spokesman said: “These are feminist jiggles, inspired by notions of equality and respect with a heavy historical nod to the Suffragist movement.

“First off we have ‘Pankhurst’, an assertive, disobedient jiggle where the model holds both legs akimbo and, while snarling at the camera, hops about the studio like an upturned sand crab trying to right itself, while miming into a headset.

“The indomitable ‘Fawcett’ is a full-body shudder resonating from the solar plexus, accompanied by the act of mock-fellatio on a mobile telephone.

“‘Paglia’, so-called because of its iconoclastic nature, involves looking back and to the left while sucking a thumb and alternately flexing each buttocks. It’s a modernist update of the ‘beckoning bounce’ type of jiggle.”

Babestation fan Tom Logan said: “When I’m slightly drunk I like to sit and let Babestation wash over me, like a warm lapping ocean of stale sweat with cigarette butts in it.” 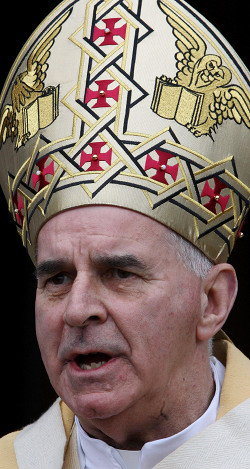 Although I am a man of science, I have a lot of time for Cardinal Keith O’Brien.

This is because he has much in common with the Higgs Boson, whose responsibilities also include giving mass and wrangling with flouncy little pests who want to combine with each other in extravagant partnership ceremonies.

Cardinal O’Brien, like the Higgs, is an almighty mass giving enigma. Ordinary people are unpredictable little quarks who tear around the universe without a clue what they’re doing. As mass ceremonies are difficult to avoid, all quarks at some point will end up in one. Some will escape unfazed by the experience and will continue rattling along at light speed to somewhere like Alicante or Mecca. But others will be rendered heavy, sluggish and will be made to do things they wouldn’t normally have done. Any massive particle – be it me, an aubergine, an altar boy – we’ve all been interfered with.

Cardinal O’Brien is annoyed because he believes David Cameron is trying to redefine reality. Indeed, redefining reality is very dangerous and I can fully understand his concerns. You see usually, quarks hook up in combinations of one quark and one antiquark. This is the way the cardinal likes it because it’s nice and simple. Sometimes, three drunk quarks hook up to make a baryon – the cardinal can live with this even if it does make him a big fidgety. Some fantasists say you can even get them with five but thus far, they’ve been unable to back this up with authentic footage so it’s safe to assume they’re liars.

The Cardinal’s right: you don’t want to mess around with reality. And if you must repeatedly participate in risky, high-energy collisions with lots of like-minded quarks, you better make sure you do it in a controlled environment, preferably somewhere secret and underground on mainland Europe – the way Professor Brian Cox does.

It’s demoralising to see all your particles running off to form mind-boggling unions with each other. But in time I think Cardinal O’Brien will find there’s nothing to worry about. I have several catholic colleagues and, for the moment at least, it seems none of them are prepared to leave their wives and have a gay marriage bash in the local chapel. And even if they did, they all have such fabulous singing voices and are such lovely dancers, that it really would be a thoroughly jolly knees-up.