BBC Presenter Sacked For Not Using A Coaster

THE BBC has sacked a local radio presenter for not using a coaster in her own home.

Sally Bradford, host of BBC Bath's Hello Bath, was dismissed after placing a mug of hot coffee on a table, leading to an obvious, beige-coloured ring.

Bradford said: "I was in a hurry, the phone was going and I accidentally put the mug on my lovely oak coffee table.

"It was only when I got home that I noticed the damage. I phoned the local furniture repair service and asked them to send a French polisher, but not an actual French one because that would scare the bejesus out of my six year-old.

"I was simply stating a fact. I had damaged my coffee table and my daughter is terrified of Frenchmen."

Unknown to Bradford, the call was recorded by the repair company who then decided to become upset.

A spokeswoman for BBC Bath said: "When we heard the recording we could not believe a respected professional like Sally would have failed to use a coaster on such a nice table and we dismissed her with immediate effect.

"It is not appropriate to use the licence fee to pay people who do not know how to look after things they bought with their own money."

Bradford added: "Come to think of it, maybe my daughter's a little bit racist. Oh well, at least now she won't grow up to resent Frenchmen."

Somebody sells a house 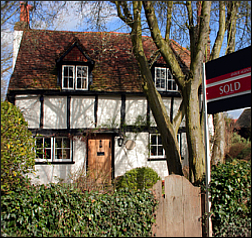 THE British economy turned a corner last night after somebody sold a house.

The prime minister said it marked the ‘beginning of the end of the beginning’ as the FTSE 100 climbed by 12 points and then stayed there for 20 minutes.

The sale was completed shortly after midday, but was kept under wraps until Downing Street had been informed.

It was finally confirmed in a newsflash from the Press Association at 1.26pm.

The soon-to-be-former owner Tom Logan said: “We had given up hope, what with the banks being shits and everything.

“But then this couple turned up, had a poke around in the kitchen, fiddled with the central heating, flushed the toilet and then suddenly said, ‘we’d like to buy it.’

“My wife collapsed, I got a nose bleed and the dog started howling like a coyote.”

By late afternoon a large and boisterous crowd had gathered outside the detached cottage in the Home Counties village of Minchinhamptonsteadbury as Mr and Mrs Logan gave interviews to Le Monde, CNN and Japan’s TV-Osaka.

Burger vans and buskers cashed-in on the celebration while quick-witted entrepreneurs sold mugs, baseball hats and souvenir flags immortalising ‘The House That Someone Bought’.

Mr Logan added: “I’ve no idea where they got the money from. Maybe they’re drug dealers. Good luck to them.”