The veteran documentary maker slumped in his chair with his head in his hands, sobbing quietly before walking to the lavatory and throwing up for half an hour.

Sir David added: "We spent four years developing a camera we could put inside a hummingbird's egg so you could actually witness the development of those amazing wings.

"We then waited for the bird to hatch and grow and then filmed it at such close range you could see the expression on its face.

"But no, you're right. How tedious. If only we'd trained the little fucker to dance."

The BBC has now sold the 'Strictly' format to 34 countries, occasionally throwing-in a free VHS video of Life on Earth.

A spokesman said: "The groundbreaking thing about Strictly Come Dancing is that we take people you would not normally associate with dancing and then we film them dancing.

"Often we do have to remind the viewer who the celebrity is so they realise the celebrity would not normally be dancing. But then we can say 'wow, look at that bloke off the news – he's dancing!'"

22% Who Trust Politicians To Be Deported 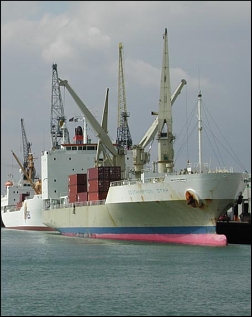 THE 22% of Britons who trust politicians should be deported, it was claimed last night.

According to a recent survey more than a fifth of the adult population not only trust our political leaders but believe they are about to earn a multi-million pound commission after helping a Nigerian doctor transfer money from Andorra.

Now a panel of leading academics has called for all eight million of them to be herded onto boats and shoved into the Atlantic.

Professor Henry Brubaker, director of the Institute for Studies, said: "We will have to commandeer car ferries and mobilise the entire merchant fleet.

"We may even need people to volunteer their own pleasure craft, a bit like the Dunkirk evacuation, but in reverse.

"Of course the deportees will have to pilot and navigate the vessels themselves which will lead inevitably to some very heavy losses. How terribly sad.

"I imagine the remaining ships will be rejected at every port and left to wander the high seas like some Voyage of the Idiot Damned."

Meanwhile the panel has also demanded a special camp for all those who have signed the 'X-Factor: Bring Back Laura White' petition.