NEW BBC series The Musketeers has been condemned for portraying Alexandre Dumas’s characters as human rather than canine.

Viewer Roy Hobbs said: “When I heard the BBC was doing a big-budget live action adaptation of this classic tale of hound courage, I was like ‘wow, real dogs in leatherwear having sword fights’.

“But they’re fucking people! Even the character of Milady de Winter is portrayed by an actual lady rather than a sexy cat.

“Dumas must be turning in his grave to see his original novel of brave anthropomorphic animals defiled in this way. I just hope the BBC keeps its meddling hands off Cities of Gold.” 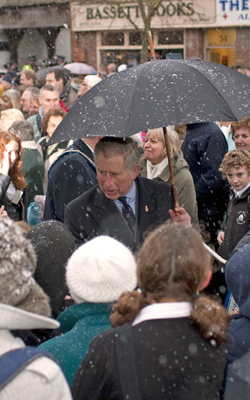 THE Prince of Wales is being exposed to the working classes twice daily to bolster his immune system before he takes the throne.

Last week Charles managed to hold a handshake with a Birmingham welder for a full three seconds.

A Palace aide said: “It’s hard on him  he cried for an hour yesterday when he was forced to sit on a DFS sofa  but it’s necessary.

“Without this preparation, he’d take the first pink wafer biscuit that was offered and the shock would prove fatal.

Tutor Julian Cooks said: Its all about acclimatization: five minutes with a Mancunian here, ten minutes with an Essex girl there, building up to 20 minutes trying to understand a Geordie.

Teaching the Prince to say And what do you do? has been hard, but teaching him not to reply And what the fuck is that? when they answer is even harder.”

Charles is being forced through the process by his mother, who says that the resistance to poor person germs she built up during her two-week stint pretending to be a driver in the Womens Auxiliary during the war has stood her in great stead.

The Queen said: When that Irishman broke into my bedroom in 1982, I was able to engage him in conversation about the TV series The Professionals and whether Kevin Keegan could still do a job for England until the police arrived.