Big Brother Contestants To Get More Bananas And A Rope Swing

BIG Brother contestants are to be given more bananas and a tyre on a rope, Channel 4 said last night.

The troop spent the early days of the series sunning themselves on rocks and picking insects from each other’s hair.

However, they soon became bored and divided into rival factions, attacking each other with the sticks they use to catch ants. Last Thursday a tea party descended into faeces-ridden chaos.

A Channel 4 spokesman said: "Young Big Brother contestants are naturally curious and playful. But we are starting to see an aggressive streak which could lead to all out war and, eventually, cannibalism.

"If the bananas and the rope swing don't work we'll give them some beads and an exercise bike. After that we release the bounty hunters."

However, Nikki Hollis, an animal welfare expert, said: "Big Brother started off as a valid scientific experiment, but these poor creatures are now being made to perform like circus humans.

"The sooner we can release them into a life of fourth-rate celebrity and tragic personal appearances the better." 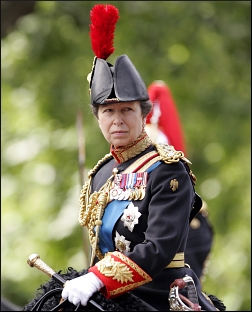 PRINCESS Anne was put up for sale last night as the Queen looked to plug a £32 million hole in her finances.

The Queen has been forced to give up her controlling interest in the Olympic horsewoman in a bid to raise cash for essential roof repairs and asbestos removal at her eight gigantic palaces.

There is already strong interest in the 57 year-old Princess from Moscow and Beijing, where she is regarded as a great delicacy.

Meanwhile the Royal Bank of Scotland has made no secret of its desire to buy 51% of  the Princess as a first step towards an eventual takeover of Prince Andrew and the Duke of Kent.

A 10% stake in Princess Anne would give shareholders the right to bring their own horse to Trooping the Colour and spend two weeks a year as patron of Save the Children and the St John Ambulance Association.

They will also get seats on the half-way line at Murrayfield and two free bets at some of the Princess's favourite dog fighting pits.

He added: "How else does one raise £32 million when all one has to one's name is half of Scotland, eight gigantic palaces and the greatest art collection in the history of the world?"