SOME of the biggest names in showbiz have come together in London to prove how shabby and pointless they are compared to Nelson Mandela.

Stars including Emma Thompson, Gordon Ramsay and the Sugababes shared the red carpet to speak about how happy they were that Mandela had not been beaten to death during his 30 years in a South African prison.

Thompson, an actress, said: "Nelson's sacrifice is a constant inspiration to me when I'm being paid £5 million for dressing up and pretending to be someone else."

She added: "I'm sorry, I have to go, I've just spotted Bobby, Pierce and Will sharing a joke with Uma and Elton."

Former US president Bill Clinton said: "I would often think about Nelson Mandela's years of incarceration and his efforts to unite a country so filled with hatred and mistrust when I was shoving cigars into plump young women."

He added: "I'm sorry, I have to go and ask Cherie Blair how much money she's made this year."

Mr Mandela said: "When I was chained to a radiator on Robben Island, I dreamt I would live long enough to be able to come to London for my birthday and help a bunch of self-absorbed millionaires feel even better about themselves."

He added: "I'm sorry I have to go. Bob Geldof is coming this way and I have to pretend to be dead." 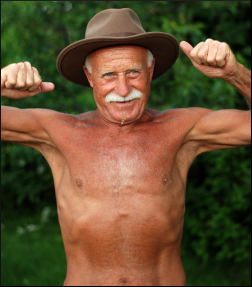 SUPERMARKET rivalry has intensified after Tesco promised to put all your dirty pictures on a cake.

With Asda banning all forms of cake-based nudity, its rivals are filling the gap in the market with a range of pornographic frosting options.

Tesco, Britain's largest supermarket, has launched a series of special offers, which they claim will make it easier than ever for consumers to put graphic sexual images on a cake.

A Tesco spokesman said: "If it's your wife's birthday, why not surprise her with your balls on a lemon sponge?

"Or treat your best friend to a chocolate gateaux showing him being fellated in Amsterdam by that really lovely girl who turned out to be a man.

"We're also doing a walnut and coffee arse cake and a three breasts for the price of two, office party special."

Meanwhile Sainsbury's is offering to recreate scenes of tasteful nudity for £5, using free range eggs, while Morrison's is giving customers a free cake with every order, showing a nude Alan Hansen posing with a set of bagpipes.