POSITIVE discrimination is the only way to help women achieve success in the workplace, some jumped-up cow said yesterday.

Harriet Harman, an over-promoted woman from London, said women still face constant male chauvinism, despite the fact she had obviously not done too badly herself.

"If it was not for positive discrimination I would not have been able to get above myself in such an extravagant and irresponsible way."

Under Ms Harman's proposals women who want to be airline pilots will not have to be able to fly, but will get the job if they are roughly the same height as the male candidates and are able to wear a hat.

Positive discrimination will also be extended to food stuffs and inanimate objects so that if a man is up against a tea cup, the tea cup will be offered the job.

Ms Harman said: "If vegetables can produce, watch and star in Big Brother, there is no reason why a large piece of wood cannot run Vodafone."

But Bill McKay, deputy director of the CBI, dismissed claims of workplace discrimination, adding: "These days most organisations simply choose whoever is the least biggest arsehole. If only the Labour Party would do the same."

Dubai Plans Skyscraper Made Of Fanta 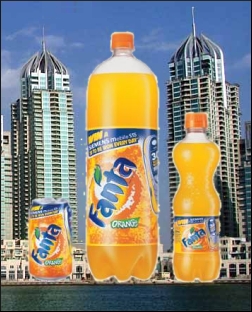 THE oil-rich state of Dubai has unveiled plans for a daring new skyscraper constructed entirely of Fanta.

The mile-high building will include 150,000 luxury apartments, 127 five-star hotels and 16 million gallons of the fizzy orange drink.

It will be designed by the German architect Jules Berghoff, who specialises in working with soft drinks and last year completed an office block in Bahrain based on the original Soda Stream machine.

Berghoff said: "Dubai is a very now, tomorrow kind of place. There are no yesterdays here.

"That means using lots of very tomorrow materials, and what could be more tomorrow than a building made of Fanta?

"The Fanta will form the walls and floors, but we will be able to pour the entire structure into a bottle in the event of high winds."

Dubai is at the cutting edge of international architecture and has already outlined plans for the world's first walking skyscraper.

The 20,000ft tall building will be able to move freely around the city, peering in the windows of other skyscrapers or posing for tourists next to their hotel.

If temperatures rise above 37 degrees centigrade the building will go and sit in the sea for half an hour, before having a nap under the world's most gigantic palm tree.