MPs Think You Must Be Some Kind Of Twat

A YEAR long review of the rules governing MPs’ expenses last night concluded that you are a complete twat.

The House of Commons report said reform of the expenses system was necessary to make it more transparent and easier for MPs to put your money directly into their bank accounts.

Key changes include the scrapping of an annual allowance of £24,000 for running a second home, to be replaced with a radical new £24,000 second home grant.

A controversial £4,000 a year allowance for food will also be abolished, and MPs will now have to get by on a subsistence grant of just £4,000 instead.

Labour backbencher Tom Logan said: "Under the old system MPs could claim £35,000 a year in expenses without receipts. Now we will receive two payments of £17,500, the crucial difference being there will be no need for receipts."

He added: "If it seems complicated that's because it is, so don't even try to understand it because you might die."

Mr Logan then picked up a tennis ball, waved it in front of your eyes and pretended to throw it into the corner of the room.

After your unsuccessful attempts to retrieve the ball, he suddenly produced it from behind his back, leaving you confused but still excited.

He then waved the ball again and went to throw it into the opposite corner of the room, but when you ran over there you discovered it was still in his hand after all.

Army Can't Fight 14 Wars At Once, Says Duke Of Wellington 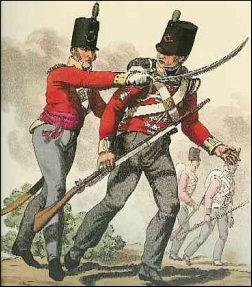 HIS Grace the Duke of Wellington has implored Parliament to limit the active engagement of the British Army from the current obligation of 14 wars to a mere eight.

In a letter to the editor of The Times the Duke gave dread warning that the Royal Scots and the Coldstream Guards are stretched beyond reason and in desperate need of new hats.

"Sir, these hats are not fit for a Frenchman," wrote the Duke. "I implore the Prime Minister and the Prince Regent to immediately make funds available for the commissioning of a new hat, which I myself have designed."

British regiments are currently suppressing four separate Indian rebellions, while the remainder of His Majesty's forces remains at war with France, Italy, Austria, Venezuela, the Ottoman Empire, China, Siam, Abyssinia, the Zulus and the Isle of Man.

"Without these fine new hats and the soldiers that fight beneath them, we will surely lose the initiative on the Iberian Peninsula," continued His Grace.

"In a matter of weeks the Horn of Africa will once again find herself besmirched by the dread clutches of the ghastly Turk!

"We must secure at once an honourable settlement which returns fair Siam to the stewardship of the Belgians, while acceding to Venezuela's alliance with the Emperor of Japan.

"Meanwhile, the Manxmen of the Isle of Man must be allowed to return to their goat molestations, unmolested."

His Grace concluded: "Sir, as the Duke of Marlborough once wrote, 'Great Britain must always be engaged in eight different wars. Any less is an admission of weakness, any more is just silly-buggers'."