MILLIONS of viewers have contacted British Telecom urging them to end the pathetic relationship at the heart of their long-running series of TV adverts.

The latest instalment shows the ginger streak of piss sitting on a terrace, apparently in Cornwall, emailing his mind-crushingly tedious live-in lover.

He has moved because of his job, though some have speculated it is because she hasn't smiled for nearly three years. The relationship now stands at a crossroads, with viewers across the country willing them to go their separate, tiresome ways.

Since 2005 millions have joined the couple on a slow, flat rollercoaster of emotions, that began with him moving in and having the first of many stilted conversations with whoever happens to be in the room.

The drama reached unbearable levels of dullness when she erased all the photos of her monosyllabic children, leading many viewers to assume she was some kind of moron.

But there were also pathetic attempts at light relief, including the teenage son getting into trouble for inviting his friends round to watch a certificate PG film while drinking lemonade.

The only potential excitement came when the ginger streak flirted with a gorgeous girl who was clearly up for all kinds of filth, before deciding, inexplicably, to remain faithful to whatserface.

Meanwhile a recent instalment included a desperate ploy to make him seem more interesting by showing him reading the paper and playing a bit of golf.

TV viewer Emily Francis, from Bath, told BT: "For the love of God, make it stop."

Unemployed To Be Used For Soup 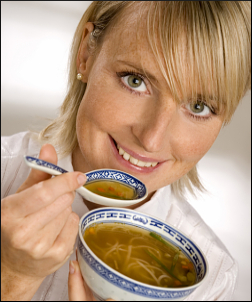 THE long-term unemployed are to be boiled down and used for soup, ministers confirmed last night.

Officials at the Department for Work and Pensions have already drawn up a list of flavours which they insist will be bursting with doley freshness.

The soups, to be sold in cartons at Waitrose and larger branches of the Co-op, will include broccoli and dolcelatte, garlic chicken broth and a spicy Mexican soup made with Geordies.

Under EU rules each carton must list the nutritional value of the unemployed and carry a sticker which reads: 'This soup contains scroungers'.

Work and pensions secretary James Purnell said the plans would transform lives by taking an unemployed person with no qualifications or prospects and turning them into a rich, meaty stock.

He added: "We have been guilty in the past of not using poor people to make soup.

"But we've listened and we want to assure hard-working families across Britain that if there's anything they disapprove of we will simmer it over a low heat with some celery and a bouquet garni."

Meanwhile, Mr Purnell said those out of work for less than six months will have to act as footstools, towel rails and drink holders for busy commuters.

Wayne Hayes, an unemployed from Deptford said: "I'm happy to hold hot cups of coffee while people tie their shoelaces, but I've always believed I could form the subtle yet textured base of an outstanding cock-a-leekie."