BATTLESTAR Galactica was last night hailed as the most intelligent and thoughtful drama ever to be set on a battlestar.

As the long-running series drew to a close critics described it as a combustive drama that was as achingly real and relevant as anything else on television depicting the last surviving humans from the Twelve Colonies of Kobol and their war with the Cylons.

Peter Bianco, of Entertainment Weekly, said the dark and complex show delivered incisive political commentary and deep insights into the nature of polytheism as well as exploring the reliability issues of the Mark I Viper Starhound.

While Mary Mangan, of the Seattle Post Examiner, described it as an enthralling tale of human survival, complex moral dilemmas and exploding robots.

However, creator Ronald D. Moore said: "You know, all this stuff is really nice, and obviously very flattering, but it's really just about spaceships and lasers.

"If it is a subtle critique of neo-conservatism and an allegory for the war on terror then I can assure you it's a total coincidence."

He added: "Of course it's more intelligent than Star Trek, but that's because I used a thesaurus. And, unlike Star Trek, we also resisted the urge to set every tenth episode in the 1940s just so the studio could claim a tax deduction on the costumes."

Viewer Tom Logan said: "The political and religious stuff was very thought-provoking, but what I liked the most were all the women in tight vests which accentuated their astounding charlies.

"Some of them were robots, which means you could make them do anything you wanted, even really dirty stuff you'd be ashamed to ask for even if you were paying." 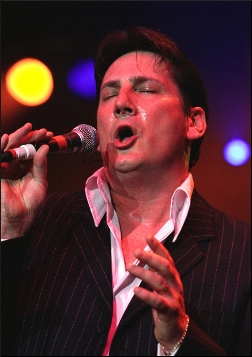 Smith said there were at least 200 active New Romantic cells across the country and claimed it was 'highly likely' Britain could fall victim to the sort of musical atrocity not seen since Gold!.

She told the House of Commons: "This government is not in the business of scaring people in a deliberate or cynical way, but once again we face the all-too-real threat of soft-focus videos set on luxury yachts.

"And while community support for Hadley, the Kemps, Le Bon and the Taylors has dissipated, their appalling acts still live-on in the minds of a disparate handful of tone-deaf fanatics."

Smith wants to train 60,000 workers to report evidence of New Romance, meanwhile police yesterday closed down a music shop in Knutsford after it was caught selling synthesisers with shoulder straps and banned copies of the sheet music for Rio.

Security analyst Roy Hobbs added: "The New Romantic Non-Proliferation Pact of 1994 was designed specifically to prevent a recurrence of chest-high bass guitars and men wearing eye-liner and silk sashes round their waists.

"Unless the government acts quickly we're facing Human League, we're facing Visage, and while I don't want to cause an unnecessary panic, we could be facing Ultravox."

David Bowie, often accused of being the originator of New Romance, said: "If I knew then what I know now, I'd have gone straight to my shit drum and bass phase."