EUROZONE nations are using this year’s international song contest to ask for financial help to a thumping hi-NRG disco beat.

This year’s competition, to be held in Azerbaijan, will see Eurozone entrants replacing the usual vague sentiments about international brotherhood and living as one family with specific economic requests.

France’s entry Veuillez ne pas Déclasser Notre Ratings-Credit is a camp, upbeat  disco-pop number about begging a regulatory body not to slash your credit rating due to short-sighted fiscal policy.

Meanwhile Greece’s offering, My Precious One I’ve Borrowed Too Much, is a poignant power ballad telling the story of a handsome fisherman asking a mermaid to write off a substantial debt.

Britain’s entry is yet to be decided but sources claim competition favourite H from Steps and 14 backing dancers have been attending night classes at the London School of Economics.

Economist Emma Bradford said: “These are powerful sentiments, sure to be expressed with all the sincerity that someone who doesn’t speak the language they’re singing and looks like a mid-priced prostitute can muster.

She added: “With nations teetering on the brink of anarchy,  Eurovision’s wafer-thin vision of harmony is suddenly relevant again.

“There is no Plan B. He has other commitments.” 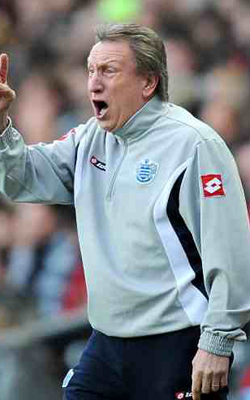 NEIL Warnock has blamed critics for his dismissal, claiming they posed as opposition footballers that kept beating his team.

Queens Park Rangers’ chairman Tony Fernandes sacked Warnock earlier this month, stating that the short-term vision of the club had been realigned to focus more on not getting their arses kicked all the time.

But dinner lady-faced anagram Warnock said: “Football critics have been infiltrating every echelon of football in a concerted effort to make me appear to the untrained eye like a cack-brained buffoon that couldn’t manage to get eleven sheep to shit in a field.

“They have an agenda of stopping the world from seeing the true magnificence of Neil Warnock and they are ultimately to blame for what people mistakenly believe are my manifest failings.”

Warnock has produced a 1,293-page dossier detailing the various ways critics have conspired to ruin his career, from steering radio-controlled footballs 35 yards over the crossbar during matches to his belief that Adel Taarabt is actually bearded, 22-stone Daily Mail columnist Martin Samuel in disguise.

He estimates that one in three opposition players were actually football pundits dressed as professional athletes, confusing his side into submission by bombarding them with questions about the percentage of effort they were giving during matches.

He also claims that his 6-0 defeat against Fulham this season never actually happened, with the game actually being a scrappy 1-0 win for QPR, but the critics spread so many rumours of his side being humped that they were eventually believed to be true.

Warnock added “One day, my sacking will be seen as a conspiracy to rival the JFK assassination, the only difference being that people were quite sad when that happened.”