DAMIEN Hirst’s bronze of a pregnant teenager has been joined by a statue of her skunk-addled boyfriend.

The artist revealed that his 66ft tribute to the town’s teen pregnancy rate has a 77ft bronze boyfriend called Ryan.

The Ryan statue shows the young impregnator wearing sports leisurewear, with an X Box controller in one hand and a 25ft skunk bifter in the other.

He said: “The concept is that the female statue, Donna, met Ryan at a party while wrecked on WKD.

“She was impressed by the fact that he was a part-time happy hardcore DJ and the pair had a bunk up in the bog.

“Soon afterwards Donna revealed she was up the spout with a massive bronze baby.

“Now Ryan’s shitting himself, he’s trying to do the right thing but is worried he might have to get a proper job instead of selling small amounts of weed to his little brother’s friends.”

Ilfracombe resident Roy Hobbs said: “I’m fine with it, they seem like a nice enough couple really and she has a belting set of charlies.” 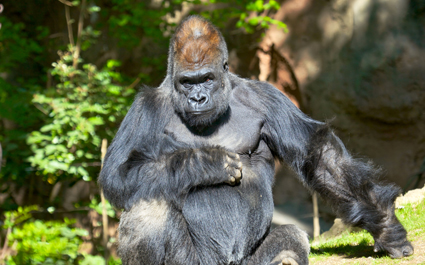 WILLARD Price’s thrilling novel Gorilla Adventure has won the Booker Prize, despite being published in 1969.

The Booker jury voted unanimously for the exciting story of pubescent brothers Hal and Roger Hunt, who become embroiled in a quest to capture a mountain gorilla for a circus.

Booker jury chairman Sir Peter Stothard said: “The way he writes it, it’s like you’re actually there. But it’s more than just a thrilling story – Price shows us how the real danger comes not from the gorillas, but the hunters.

“We all agreed that nothing better has been written since Gorilla Adventure, except possibly Shark Adventure.”