Charles letters kept secret because he is obviously insane

LETTERS from Prince Charles to government ministers are to be kept secret because they reveal the full extent of his insanity.

Whitehall officials stressed that if the letters were to be made public, no-one would want to go near the Prince in case he tried to eat their face.

A source said: “Oh, just mental. Totally mental. He has created this fully-formed imaginary world called Franjipania where he is ‘King Of All The Badgers’.

“In one of the letters he asked the department of the environment to be careful where it ‘puts the windmills’ because they ‘might interrupt his dreamquest’.

“He told the education department to introduce ‘Shakespearean arithmetic’ and he wrote to the defence secretary ordering him to invade the Republic of Jamiroquai.”

Anti-monarchy campaigners claim Prince Charles’s interventions are a scandalous attack on British democracy, while everyone else said to lay off because he is clearly just demented and a bit sad.

The source added: “Yes he is actively trying to influence government policy, which strictly speaking, is undemocratic. But the real problem is he’s just wasting everyone’s time.”

“One letter to Theresa May just says ‘Grrrrrr’.”

Food parcels being taken by bankers dressed in tracksuit bottoms 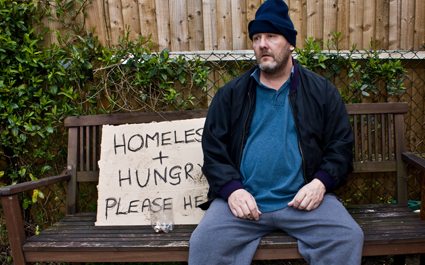 BANKERS are dressing themselves up as poor people so they can help themselves to emergency food parcels.

Charities said they became aware of the scam after noticing that several of the outstretched hands at their depots were attached to wrists wearing a Phillipe Patek watch.

Banker Martin Bishop said: “It’s free so I want it. I will then sell it to a poor person who cannot get emergency food parcels because there are none left.