KEN Russell’s funeral will need major cuts, according to the British Board of Funeral Classification.

The barking auteur’s last will includes a storyboard based on of the works of the Marquis De Sade and calls for a cast of 300 nude extras.

Funeral censor Roy Hobbs said: “Apart from anything else I’m not sure the family are going to find a vicar who is willing to have their church decked out like an inquisition torture chamber.

“So the fact that Barry Humphries has agreed to star as a transvestite altar boy is neither here nor there.”

Hopes are high that Russell will get the controversial burial he created and Mark Kermode has already asked the BBC to commission a six-part series on the funeral.

Russell’s family say he died peacefully at home, shouting instructions to his doctor through a megaphone.

A spokesman said: “The funeral is already way over budget and we may need to look to foreign investors if we want to include the 250-foot exploding crucifix.”

Bees to be privatised 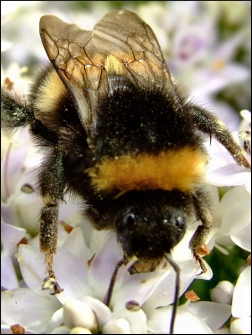 BRITAIN’S bees are to be privatised in a bid to reverse their decline.

The insects have been hit in recent years by a huge drop in productivity, mass redundancies, and the collapse of traditional honeymaking communities, and the move is aimed at getting the ailing bee industry back on track.

Beehives will be rebranded as ‘Apiary Solutions’ and the bees will get a new uniform of regulation grey, updating the traditional yellow and black outfits that bees have worn since the 1950s.

They will also be assessed on aspects of their performance by a new regulatory body, Ofswarm.

“For instance, the idea of a lone bee collecting pollen is absurd. Privatisation will allow us to to glue three or four bees together into one ‘megabee’ that will collect five times the amount of pollen of a 20th Century bee.”

“The problem with the natural world is, and always has been, that it doesn’t grasp the importance of free markets. Bees are just the start.”