BROADCASTERS have been attacked for showing graphic scenes of Bono while children could be watching.

The disturbing footage, which also appears to show Adele and Coldplay being pleased with themselves on a red carpet, was broadcast on several channels without advance warning leaving people to throw up into the same hands that are scrabbling for the remote control.

Carlisle mother of three Nikki Hollis said: “I know there are awful things in the world like Bon Iver’s album or The Edge trying to look cool, but I want to protect my kids from all that for as long as I can.

“Right now they’re at that wonderfully naive age where they think pop music is all Hard Dubstyle and Grime 2-Step but after that disgusting Q footage my youngest came up to me asked me what an Ed Sheeran is.

“I told him there was no such thing, but I could see a little bit of his innocence slipping away.”

Newspaper editors have been asked to pixellate out the more distressing sections of Q awards ceremonies, such as that face Noel Gallagher pulls to show he is treating all this ironically but is still happy to pose for photos, pick up his award and make a nice, cheeky speech.

In future Siouxsie Sioux is to be mentioned without being shown on-screen at all after over 300 complaints from viewers who feared their television had become possessed, like something out of The Ring.

But Hollis asked: “Why do they need to report this stuff at all? Why don’t we throw away all decency completely and talk about the Mojo awards like it’s a normal thing?” 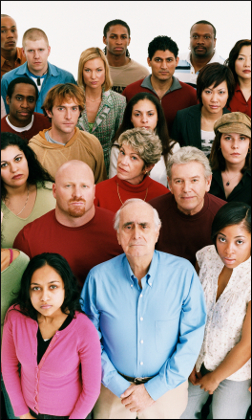 EARTH’S spiraling human population will soon make it impossible to get even five minutes’ peace, it has been claimed.

The number of homo sapiens hit seven billion yesterday following the birth of a baby boy who will probably, as soon as he’s big enough, be turning up at your house while you’re watching an interesting documentary, wanting to borrow a corkscrew.

Professor Henry Brubaker of the Institute for Studies said: “Increasingly, there will be people absolutely everywhere and they are not going to leave you alone for five fucking minutes.

“You can try ignoring their calls but it won’t make any difference, they’ll email you or send you a message via Facebook asking if you’ve seen some fucking television programme and would you like to talk about it.

“Or – as bizarre as this may sound – they will actually come to your house.

“Not answering the door will be completely futile as they’ll just clamber in through the windows to ‘see what you’re up to’.”

He added: “Imagine if even the tiniest fraction of that seven billion invites you to a tedious but unavoidable social function. You will have no time to yourself, ever.

“Should this population trend continue, it will be will impossible to ever finish the book you’re reading. Your house will be full of bored strangers too useless to figure out what to do with themselves, just looking at you hopefully.

“Make some sandwiches, get in your shed and lock the door.”