Radiohead album to be based on Osborne statement

MISERY-vending prog sulkers Radiohead will use George Osborne’s autumn statement as the lyrics for their new album. The record promises to be the most challenging 45 minutes of music since Leonard Cohen recorded his car insurance renewal phone call in 1978.

That album took an unprecedented eight years to release due to the high number of nervous breakdowns experienced by a string of producers.

The new Radiohead album, called Six More Years of Pain, will be available next spring with a cover featuring a couple in their late 70s working in B&Q behind a montage of closed down community centres.

Radiohead will promote the album with a series of gigs in empty council buildings across Britain in what will be the first tour to be sponsored by Prozac.

Frontman Thom Yorke said: “We’re not going to release the album on CD as we don’t want people yanking the disc out of the machine, snapping it in half and dragging the jagged edge across their wrists.

“We’ve moved away from traditional pop and used more experimental soundscapes, like on The Ballad of the Public Sector Pay Freeze where the percussion is an orphan’s tears falling into a freshly dug grave.

“Meanwhile Jonny plays slide guitar using a book from an abandoned library during the intro to Oh Jesus, It’s All Gone Shit.

“And on the final track, we chant George Osborne’s name over and over again while Christopher Ecclestone reads from an Argos catalogue.”

Strikers told to be home in time for Newsround 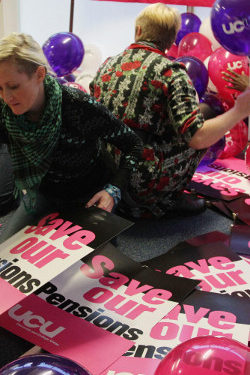 BRITAIN’S public sector workers have been allowed out on strike today as long as they are home before it gets too dark. 'Our strike's got balloons!'

More than two million workers have had some Ready Brek and reluctantly agreed to wear their mittens as their worried parents sent them off on what, for many, will be their first official day of action.

Helen Cook, whose son Julian is a member of Unison, said: “Before he went to bed last night his dad and I helped him with his placard. We wrote ‘ME’ in great big purple letters.

“He’s going to be standing outside the council building. He says he wants to be in charge of the ‘big metal bin with the fire in it’.

“The shop steward is a bit older so me and a few of the other mums have asked him to keep an eye on the little ones.

“As long as he’s home in time for Newsround then at least he won’t be walking home in the dark. And he might even get to see himself on the telly. He wants to be interviewed by that Emily Maitlis.”

Margaret Hollis, whose daughter Nikki is ‘very grouchy’ said: “Her bottom lip starts trembling and then she says ‘mummy, I was promised a lovely thing and now they’re changing everything’.

“I’m happy for her to go on her little strike but I don’t want it to disturb her routine. So, as normal, I’ll drop her off at the council building about nine-ish and pick her up about half-four. And in between times she’ll just be standing around drinking coffee and talking to her friends.

“She goes to a really nice council. As a parent, you do worry about bullying but they have a very thorough disciplinary process which takes 48 weeks and involves hundreds of people.”

She added: “I just want what every parent wants for their child – to see them ponce off to some cottage in Normandy at the age of 53.  And if we need to tax rich people a lot more then I really don’t think they will suddenly decide to leave Britain in the way that thousands and thousands and thousands of them did in the 1970s.”

Helen Cook added: “I know at some point I will have to tell him about the ‘real world’ and that if you want something nice then you shouldn’t expect other people to pay for it.

From the strike vaults: