THE Scottish Conservative Party has announced that they will hold a Tory T In The Park to rival Tory Glastonbury.

The festival will combine the alcohol intake, casual violence and general indifference to music of a typical T In The Park with the values that have made the Scottish Conservatives so successful.

Stephen Malley, Tory MP for Fife North East, said: “We’re still talking tops off, lagered up, dancing to the Prodigy regardless of if they’re actually performing or even on the bill.

“But we’ll bring to the party a powerful hatred of the Yes vote, nationalism that’s UK-centric rather than just Scottish, and of course our traditional xenophobia.

“It’s no a problem for me. I’ll headbutt anybody.”

Trump does not know difference between international diplomacy and Wrestlemania 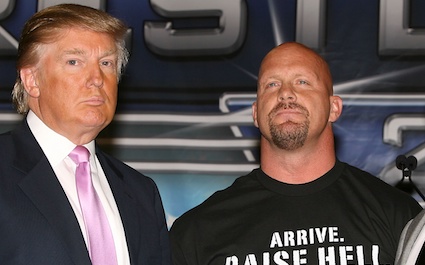 SENIOR White House staff are attempting to teach President Trump the difference between sensitive international diplomacy and trash-talking a Hell In A Cell opponent.

The world leader, who appeared at Wrestlemania XXIII ten years ago, has delivered a string of insults to rival Kim Jong-un but is worried that he has not been tough enough.

An aide said: “He says he’ll know he’s winning when the crowd hold up signs with his best insults on.

“We’ve tried to tell him that you don’t need to hype the threat of intercontinental nuclear warfare, that it really hypes itself, but he believes the American public won’t get excited until it gets personal.

“With that in mind he’s going to bodyslam his way through framed pictures of Kim Il-sung and Kim Jong-il at his next press conference, to get the world’s attention.

“Also, we’ve been forced to requisition the WWE Intercontinental Championship belt for ‘the winner’. It’s not even one of the better belts.”

Kim Jong-un said: “Bring it on, Oompa Loompa bitch. The Supreme Leader will punish you!”