WATCHING feel-good films that remind you how badly your life is going is a Christmas tradition. Here are some favourites to make you miserable:

A kid who gets abandoned by his parents and is preyed on by a pair of scary criminals still has a more magical and enjoyable Christmas than you’ll ever manage. Try to stem the flow of those self-pitying tears for long enough to enjoy the slapstick violence.

A 40-year-old man who thinks he is an elf trying to reunite with an absent father doesn’t sound like an ideal family dynamic. However, at least they end up loving each other, which is more than can be said for your strained relationship with your dad.

Are you having a worse Christmas than a divorced policeman who is still in love with his ex-wife and has to save her from an unhinged terrorist? Do you wish you could get your ex back in a similarly heroic manner but she’s spending this year with her new, younger boyfriend? Maybe switch off now before you get any stupid ideas.

Comparing yourself to attractive people having a romantic time in beautiful locations will remind you that your face is passable at best, you haven’t had sex since last April and you live in a tiny flat in a grubby city. Also, don’t kid yourself that turning up at someone’s house pissed and flirting with them is charming. It’s only charming if you look like Jude Law.

A 75-year-old black and white film about a desperately unhappy man sounds like something you can favourably compare your life with. Until you watch it, and realise that the protagonist is a way better person than you’ll ever be and deserves his happy ending. Cut your losses and stick Requiem For A Dream on. You can’t fail to count your blessings after watching that.

Family in grip of terrible inability to stop eating 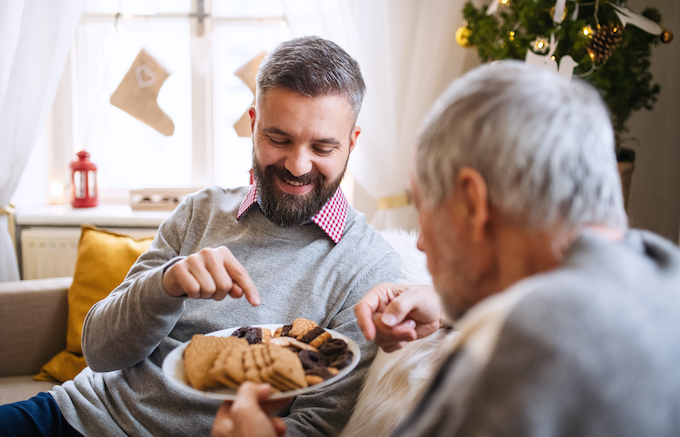 A FAMILY are unable to stop eating handfuls of turkey, mince pies and Quality Street despite not being remotely hungry.

The O’Connors developed the problem on Christmas afternoon as one by one they felt their unwilling fingers reaching out for another After Eight as if propelled by magical forces.

Dad Oliver said: “It came over me so quickly. One minute I was saying I was so full I’d never eat again, and quarter of an hour later I’d unknowingly shoved five mini yule logs down my throat.

“Since then, I can’t do anything without a handful of cheesy footballs or chocolate fingers on hand. Last night I got up for a piss and instead found myself in the kitchen gorging on cold pigs-in-blankets.

“Do I need to eat a fig and sultana cracker smeared with pâté and topped with Brie and piccalilli? No, it’s obviously disgusting, but I can’t stop.

“We’re eating ourselves out of house and home. All we’ve got left is three plates of turkey, a freezer full of Aldi canapés, a tupperware of cake, six tins of biscuits and a whole ham.”