DO you have a favourite Marvel character? Here’s what your choice says about the type of forlorn weirdo you are.

If you’re obsessed with eccentric billionaire Tony Stark, you probably also have a poster of Elon Musk on your bedroom wall. You think you’re a tech genius even though you’ve made several disastrous investments in novelty crypto-currencies called things like ‘JizzCoin’ and are, as a result, back living with your parents.

If you’ve chosen a blond Nordic beefcake who chucks a hammer about as your favourite, you’re clearly some kind of neo-fascist. Forget characters that can teleport, make themselves invisible or fly: you’re most drawn to an Aryan in a cape straight out of Hitler’s dreams.

You’re bitter that you live in an unglamorous Sheffield suburb as opposed to Manhattan and think that’s why you haven’t got a girlfriend. But, while you sit in a basement listening to Joe Rogan having a masturbatory conversation with Jordan Peterson for the 97th time, remember that if you had been born in America, you’d be just as much of a loser as you are now.

You tell people that you’re drawn to the backstory of this brooding character, or his incredible strength. In reality though, it’s because you’re a secret furry who’s sexually attracted to people dressing up as animals, and Wolverine is right in that sweet spot.

Your favourite Marvel character is as unimaginative as it could possibly be, you clichéd little nerd, and your house is no doubt filled with insanely expensive figurines that you dust obsessively. Nothing at all tragic about a man with several shelves full of dolls in their original packaging.

You fantasise about a large, muscly green woman kicking seven shades of shit out of you. There’s weird sexual kinks, and then there’s this. Good luck ever trying to explain this fetish to a partner, assuming you’re ever able to convince someone to have a relationship with you. 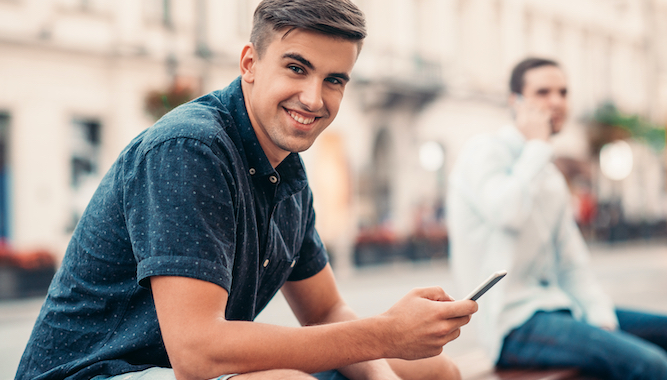 MATCHED with a hottie on Tinder? Want to make the worst possible first impression? Start the conversation with these f**kboi opening lines.

‘Hey’ Demonstrates a complete lack of engagement with their profile and doesn’t give the conversation anywhere to go. When they reply with ‘hi’, terminate the chat.

‘How’s your weekend?’ Possibly the dullest chat-up line in history. Requires the recipient to condense too much boring information into a message, which is why nobody ever replies to this.

‘Nice rack’ Forego the basic decencies of human interaction by honing in on a physical attribute. Weirdly this has never endeared a woman into getting her baps out to a stranger on an app.

[Smirking emoji] Smiles and glances count as flirting in real life. On a dating app they just look lazy and juvenile. Expect to be promptly unmatched with, and rightly so.

[Drooling emoji] Like the above, but even worse. This is the digital equivalent of looking up to see someone gawping at you and rubbing their thighs with amorous desire.

‘Sup’ The sender thinks this makes them sound cool and aloof like a sexy rebel. To the receiver it just comes across like a 14-year-old who lies about dating someone in another school.

‘Want to have sex?’ Look, most people are on Tinder for this exact purpose, but you can’t just say it up front. At least engage in some pleasant small talk first and pretend to care about them.

‘Want to Netflix and chill?’ A more roundabout but no less creepy way of saying ‘want to have sex?’ Expect to be left on read forever.

[Dick pic] Not so much an opening line as an assault against the eyes and humanity of the receiver. Nobody wants to look at your dick, unless they plan to use it for blackmail or to laugh at it. So put it away.

‘Hey, I’m not really looking for anything serious right now, but you seem really cool and I think I could fall in love with you, want to go for coffee?’ Go get the therapy you desperately need and leave these poor women alone.

‘Wyd?’ An abbreviation of ‘what do you do’, which itself is far too blunt and strange for an opening line. You’re about to find out that what they do is never reply to you.

‘Hi beautiful’ Creepy and weird. ‘Beautiful’ is a word with strong romantic worth that comes across as lecherous when used out of the gate. Save it until the fifth date, not that you’ll ever get that far.

‘What are you up to? This comes across as either stalkerish or unimaginative, neither of which is good. What they are up to is regretting accidentally matching with you.

‘What’s a girl like you doing on an app like this?’ This sleazy line didn’t work in dive bars and it’s not going to work in the infinitely more depressing world of dating apps either. Expect her to virtually make her way for the exit.

‘It was a bright cold day in April, and the clocks were striking thirteen’ An excellent opening line for George Orwell’s Nineteen Eighty-Four, a less than suitable opening line for Tinder. You don’t seem clever, you seem like a try-hard nerd.

‘What’s your mother’s maiden name?’ You are clearly a scammer who is trying to swindle the recipient. But you’re showing more of an interest than all of the above, so well done.

‘Hi.’ The punctuation is deafening in this one. You don’t come across as cool and authoritative, you sound like a serial killer.

[A GIF of Jim Carrey howling like a wolf in 1994’s The Mask] This is a reference to a Tex Avery cartoon called Red Hot Riding Hood which will not be understood by a contemporary audience. Plus it’s too creepy for an opening gambit.

‘Hey I really like your profile and would love to get to know you better’ Clearly a nice guy act that’s masking your true disgusting personality. You’ll have to try a little harder than that to win over a woman on Tinder.