Your step-by-step guide to painting a £10 million Banksy

GRAFFITI artist Banksy has just sold a frankly bollocks painting for ten million quid. Here’s how to paint your own:

Step one: choose a trite subject

Find a subject that’s very slightly edgy but everyone basically agrees on, like McDonald’s being bastards or MPs being crap. That way you’ll trigger the little nodding dog in their backbrains and they’ll flock for selfies in front of it to show they agree.

Say you’ve chosen to shock the world with a piece about climate change being bad. But how to illustrate it? For inspiration, try looking at some terrible newspaper cartoonists churning out derivative crap and pitch your take one level below theirs.

You’ve chosen to depict a Boeing 737 airliner with skulls painted on the side to show how many people it’s killed, in a bold, hard-hitting piece guaranteed to cut carbon emissions by 90 per cent within the week. But how should it look? Obviously like a photograph crudely transposed into a four-layer stencil, because all Banksys are identical.

The perfect place for a piece like this would be an airport, but they have security. So instead go to any major city where loads of press photographers live, slap it on a wall and you’ll be on every front page tomorrow because the main story doesn’t have great visuals.

Who flies a lot? The super-rich. Target that audience specifically by producing a limited run of six canvases of this deathless and famous work, selling them for £300,000 each. That’ll show them for having private jets.

Step six: sit back and marvel

Well done! You’ve created great art, and you’ve got an extra-massive version stored away to sell for £10 million in a few years when the market’s risen. Time to sit back, relax and marvel at how incredibly rich this scam has made you.

The arsehole's guide to booking a meeting room 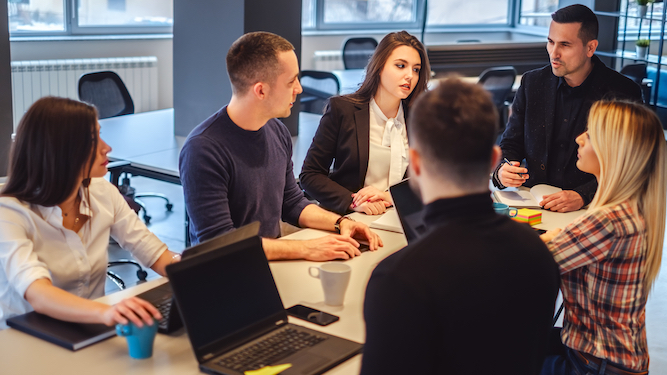 EVERYONE hates meetings, but they need to take place somewhere. Here’s how to resentfully arrange your next one:

Book a room that’s too small

To reassert your dominance in the nest of vipers you work in, book a room incapable of seating everyone. Secure your chair and watch social Darwinism in action as the rest battle for somewhere to sit. Latecomers and the lowly have to stand, making the office hierarchy absolutely clear.

Aggressively usher out the previous meeting

Most meeting rooms have windows, or holes physically punched through of it following a particularly nasty exit interview. Either way, these are perfect for peering through and tapping your watch at the room’s current occupants. Feel free to do this ten minutes before your meeting is due to start.

Dial in via video

Meetings are agonising enough as is, but throw tedious technical confusion into the mix by insisting that you join via video. Angling the camera badly will mean everyone spends the whole time marvelling at your double chins.

Book it at the last minute

Keep minions on their toes by waiting until moments before the meeting to announce it. Without time to prepare everyone will be bullshitting, not just you, and at least one colleague will walk past from whichever meeting room they usually hide in and do a comical double-take.

Do it last thing on a Friday

The meeting room calendar is always empty towards the end of a Friday because only a sociopath would schedule one for that time. Good news for you. Test the commitment of your employees by drawing out a pointless meeting until ten past five, then magnanimously annouce you’re ‘wrapping up early’.