TONY Blair last night predicted a new era in the Middle East after offering Hamas three years protection on their no claims bonus.

Mr Blair is in constant demand

After weeks of negotiation Mr Blair said Hamas had finally agreed that 'change happenz' and signed up for a package that will save the militant Palestinian organisation hundreds of pounds a year.

Hamas has been crippled by insurance claims since it started blowing up cars in the mid 1970s.

Mr Blair said: "A car bomb is not usually classed as a no-fault claim, so inevitably Hamas is seen as a high-risk with substantial ongoing liabilities.

"I had a look at their existing policy and there's no courtesy car, no breakdown, and the windscreen cover is laughable. But what would you expect from Norwich Union?"

He added: "I'm giving them three years, that's right, three years NCB protection, up to £1 million in legal fees, European breakdown cover and I'm even throwing in a state of the art Samsung DVD player. Calm down dear? I wish I could."

The former prime minister is also urging Hamas, the PLO and Islamic Jihad to replace their existing fleets of Toyota Hi-Lux pick-up trucks.

"On paper a brand new Toyota looks like a lot of money, but as it happens I know of a reputable New York bank that can finance the whole package at 4.6% a year APR. Why not give us a call?"

MPs Banned From Paying Their Children To Live In Fulham 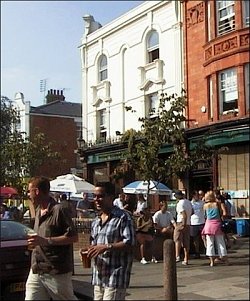 MPs are to be banned from paying their children £40,000 a year to live in Fulham under new Parliamentary regulations. The White Horse is really nice during the summer

Most MPs currently maintain one or two sons and a daughter in a large flat in the area to conduct research into developments in the strategically important London borough.

Conservative MP Tom Logan said: “My son Zack has spent a lot of time researching the introduction of the smoking ban at the White Horse in Parson’s Green. It seems to be going well but they do have a large beer garden.

“He’s also keeping an eye on the local economy, and as soon as house prices come down I’m going to buy another flat there with my housing allowance. I made an absolute killing on the last one so I’d be stupid not to.

“It really is a lovely place to live, and whenever Tom and his chums want to pop into the Commons for a few subsidised drinks, it’s just 20 minutes on the District line.”

Labour MP Henry Brubaker said it was vital he maintained at least one child in Fulham to keep a watchful eye on his class enemies.

He said: “I might represent a dirty, northern constituency but there is no need for my children to have to live there and run the risk of getting fat or pregnant.”

Under the new rules MPs’ sons and daughters will have to live in south-east London, somewhere between the Elephant and Castle and Peckham.

Although they will no longer be on a wage from their parents, they will be allowed to sell cannabis and reconditioned handguns.