Britain Advised To Fill Up On Bread

THE Bank of England is advising Britain to fill up on bread and make tea with their own urine after new warnings of an economic slump.

Mother's Pride consumed with tap water or a thin gruel provides good bulk and will relieve hunger pains for up to six hours, the Bank said.

Wholemeal will provide a greater feeling of fullness for longer with fewer slices, however it is more expensive and should be reserved for birthdays and weddings.

Mervyn King, the Bank governor, said the global economy, "is going down the turd-funnel – sharpish", but warned against ciabatta and focaccia which he said were full of hot air and holes.

"The price of foreign bread is unsustainable. Meanwhile some spic in a caff that stinks of fat wants an Ayrton for a fucking sandwich which doesn’t even fill you up? Maybe if I got to sleep with his daughter as well. I could get four pie meals with mash and liquor for that. Sesame seeds? I shit 'em."

The Bank also wants households to limit themselves to one toilet flush per day and recommends families draw lots for the first and last expulsion.

And it is urging people to avoid expensive kettle boiling by making tea and coffee with their own urine. "It's steaming hot and produced within a body powered purely by bread. What more do people need?" the Bank said.

Alistair Darling, the Chancellor of the Exchequer, added: "Has anyone got any handy-wipes? The poo is now running down my legs."

He Promised To Oil My Chain, Claims Abused Bike 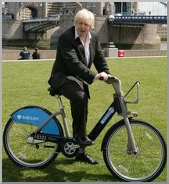 THE bicycle at the centre of Britain's worst case of inanimate object abuse has told how she was offered treats including expensive chain-oil, a new bell and a dynamo.

Bike 'X' said she trusted her owner and was happy for him to sit on her up to three times a day.

She told the Daily Mash: "There were times when I thought he was rubbing his bottom into me a bit hard, but I didn't say anything.

"Then, after a couple of months, he said he wanted to do more than just pedal to the video shop.

"At first I said no, but he was really sweet and would give me presents, rub lavender oil into my saddle and pump me every morning.

"Then one afternoon he came home drunk, removed my handlebars and stuck his whatnot into the metal tube.

Police say the case is even more horrific than the infamous Angle-Poise Lamp Abuser who stalked the reading-nooks of Swindon in the mid-1990s.

Superintendent Bill McKay said: "The angle-poise lamp is the inanimate equivalent of a dirty gymnast.

"But it's quite another thing to force yourself on a defenceless bike that just wants to be ridden for pleasure."