Britain 'could do more' to discourage tourism

TOURIST attractions in the UK must redouble their efforts to stop the place being overrun by foreigners, officials have warned.

As the latest Lonely Planet guide dismissed the country as overpriced and uninspiring, tourism authority Visit Britain asked the publishers not to forget it is also bastard freezing most of the time too.

They have now requested that the cover for the UK guide be a photograph of a teenager being listlessly fingered in a Carlisle bus depot and for the prose to be re-written by a provincial insurance salesman.

A Visit Britain spokesman said: “We’ll discourage every last fat, rucksack-wearing shit from strolling along the train platform while I’m trying to get to cocking work, even if it means raising the prices at Tussaud’s to £300 to look at a replica Alan Titchmarsh.

“To be fair, the North has been doing a cracking job for years by being insanely dangerous and filled with dialects while East Anglia is essentially a giant pond full of things that might leap out and try to fuck you at any second.

“But some of Britain is actually quite pretty, so we’ve had to fill those parts with bleak mediocrity-bunkers posing as B&Bs that charge a week’s wages to sleep in a stained cot that smells like damp from the 1950s.”

Further discouragement will include a new visa requirement for tourists to watch an hour of regional television from any part of Britain they intend to visit, as well as being kept on the plane until they have read a whole Melanie Phillips column.

The spokesman added: “It’s actually a shame all those lives were lost defending us from invasion during the war, because I think even the most determined megelomaniac would lose heart by the time they got to Maidstone.” 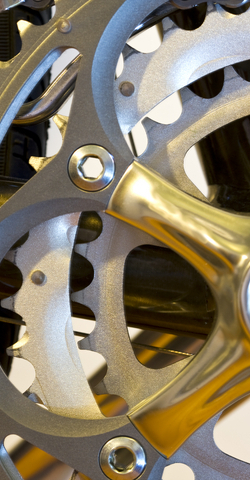 PUSH bike devotees are scheming to subjugate the Western world to their deity Shimano, it emerged last night.

Cycling has become increasingly prevalent in recent months, despite being shit, triggering speculation those devoted to the hobby must have a more sinister agenda other than very uncomfortable transport.

Tom Logan, Grand Cantilever of the Guardians of Shimano, said: “We have now achieved Objective One of The Pedal Plan – to own the roads through being mildly obstructive.

“With the cars gone, we can zip around everywhere at speeds of over 30mph, garotting non-believers with brake wire.

“Once all dissenters are dead, we will begin to customise our body parts, replacing limbs with wheels, to become more like the mighty Shimano.

“In the new land of Pedallon all will be new and clean and emission-free. Clothes will be made of scrotum-hugging futuristic fabric and the only legal music will be Kraftwerk.”

He added: “If anyone tries to stand in our way, we will knock into them and then pretend it’s their fault.”

Conspirologoist, Dr Helen Archer, said: “The real problem is that they will know very quickly who the non-believers are because when you meet a cyclist it is absolutely impossible to hide your contempt.

“That said, I am not sure if their bike-based society would be better or worse than Clarkson’s being-a-prick-based society.”