But We Love The Madness, Bankers Tell Darling

BANKERS have rejected Alistair Darling's plea not to return to the 'madness' that caused the recession, insisting they bloody love it.

Julian Cook, from Donnelly-McPartlin, said: "What Mr Darling completely fails to understand is that I'm not right in the head.

"This is a picture of my daughter Maisie. I can let you have her for two grand and I'll even throw in the garden swing. You see what I mean? I am fucked up."

Martin Bishop, from Madeley- Finnegan, said: "It's the madness that gets me out of bed in the morning. Without it I'd go mad."

He added: "There are two reasons why people get into banking. One, you get access to some really excellent pens, and two, the absolutely enormous amounts of money.

"If you take away the money then I may as well go off and become something worthwhile like a nurse. Or a prostitute."

Meanwhile commentators who earlier this year had predicted the end of capitalism were last night staring at the rock solid inevitability that everything was hurtling back to exactly the way it was.

No-One To Phone A Radio Show Ever Again 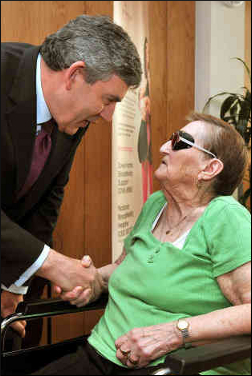 PEOPLE across Britain last night agreed never to phone a radio show ever again in case Gordon Brown decides to visit them.

Officials said there was an immediate danger of a prime ministerial visit if they spoke to him on a radio show, but also warned Mr Brown could simply be listening to the radio, hear someone he likes the sound of and then call them up and ask if they would like to be his friend.

The alarm was raised after the prime minister spoke to members of the public on a phone-in show on BBC Yorkshire before appearing unannounced at a shop in Leeds with a box of luxury biscuits and two tickets to Jersey Boys.

Greengrocer Bill McKay said: "My wife phoned the show to ask Mr Brown what he was doing to help small businesses. Two hours later the fucker's standing in front of me asking me what my hobbies are.

"He was so boring and pathetic and I kept trying to get rid of him. Eventually I had to pretend it was early closing and I had an appointment to get my legs waxed. Anyway, we're going to see Jersey Boys with him next weekend."

Mr Brown spoke to Mr McKay for an hour insisting the government was increasing public spending by 15,000% a year for the next 2000 years, while the Downing Street psychiatrist stood behind him shaking his head and mouthing, 'just ignore him, I'll deal with it later'.

Mr Brown also tried to strike up a conversation with butcher Stephen Malley. Mr Malley said: "I was like 'no way, I'm not having this', and he was like 'what are your hobbies?', and I was like 'out – now'."

A Downing Street spokesman said: "With Peter Mandelson doing the actual governing the prime minister is now able to spend a lot more time with his friends. Which creates an obvious problem.

"If he can't find any friends via the radio I suspect he'll just start phoning up some of the exhibits from the Jeremy Kyle Show and offering to help turn their lives around.  But you know what they're like, they'll just take advantage of him. It's all so terribly sad."