TORCHWOOD creator Russell T Davies has reacted angrily to cuts in the series by threatening to turn the BBC's entire TV output into a same-sex inter-galactic love-in.

Davies warned he and his army of hyper-camp android production assistants would wrest control of Broadcasting House and unleash a menagerie of polysexual extraterrestrials onto existing programmes.

He said: "I'm talking about creatures like the Gayoid, a big pink cloud from the star system Gay Minor, that will bum Huw Edwards as he tries to read the news.

"Mind-controlling gay space slugs will be released onto the set of Eastenders. One will attach itself to Phil Mitchell's spine, causing him to close down the garage and set up an interior design consultancy, which will really tit up their story arcs.

"Those gaylien-hating commissioners will rue the day they cut the series length of South Wales's leading sexually-ambiguous science fiction show."

The writer/producer refused to be drawn on rumours that he is planning a 'nuclear option' if BBC bosses do not acquiesce to his demands for a full twelve-part Torchwood series: a live broadcast of Annie Get Your Gun starring John Barrowman and a cast of cowboy-hatted cybermen that, if transmitted, will release a blast of cosmic gayness so intense that viewers' eyeballs will burst and leak pink fluid.

He added: "'I haven't yet decided if or when The Barrowman will enter play. He's currently chained but ready." 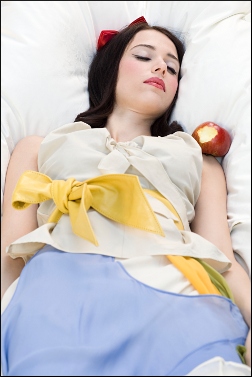 PRINCE Charming has been handed a 48-hour deadline to get to the Neverland Ranch and attempt to revive Michael Jackson.

Preparations are currently being made to place the singer in a glass coffin which will then be surrounded by an honour guard of seven dwarves in their dress mining uniforms.

Tom Logan, the Jackson family lawyer, said: "It's up to Prince Charming now. The ball is very much in his court."

The dwarves hope the Prince can find a horse that is strong enough and fast enough to carry him the 150 miles from the Disneyland Castle in Anaheim and rouse the star from what one bearded Neverland insider described as 'the very deepest of sleeps'.

Jackson was declared dead last week after being injected with the juice from a poisoned apple, which police believe was supplied by a very ugly old woman with a large wart on the end of her nose.

The Neverland source added: "Just last week we watched him rehearse a lovely song about how one day his prince would come. He was on terrific form and didn't even need the woodland creatures to help him get dressed. And now this."

A spokesman for Prince Charming said: "His royal highness developed a very close friendship with Mr Jackson after returning one of his shoes, but we think some people may have got the wrong end of the stick, as it were.

"He's very sad at the way things have turned out, but he thinks it would be best if everyone just moved on with their lives."

The spokesman added: "He will attend the funeral but then he fully intends to continue with his plans to spend the summer having acrobatic sex with a wide selection of European princesses and doing a bit of shopping."