This week finds me in the former lava-loving, viaduct-building world dominator: Roma, Italia!

It's always been my dream to come to Rome so I can see if all roads really do lead here. I now fully understand how they do as there are just so many roads, and they literally lead in hundreds of directions. Romans get super excited about the roads and rarely stop their mopeds to let regular people onto them.

First stop was the world's most important fashion street: Via del Corso. I treated myself to a new pair of flip flops: real Pradas completely encrusted with diamante instead of toe-cheese like the ones I've been wearing since China. Normally, I'm totally against designer gear, but 'When in Rome…' Besides, those kiddies get really pissed off when they spend all day making flip flops just for spoil-sports not to buy them. Plus, I've been to Vietnam and know that 5p a day can actually stretch quite far there.

By the grace of God, I followed one of the many roads all the way to the Vatican, home to wonderful people wearing costumes: some all Mardi-Gras like the Swiss Guard and others much more serious like His Lordship, the pope.  My new flip flops were beginning to chafe a little bit as I headed for the Sistine Chapel, but I took that to be an indication of their immense quality and thoroughly enjoyed every minute.

Michelangelo was so good at painting noses and hands, which are without doubt the most difficult things in the whole of art. However, there didn't appear to be any secret messages hidden in the Sistine Chapel, which made me think the Da Vinci Code might not be the ground-breaking masterpiece I'd imagined. I learned so much more about Catholicism from Dan Brown than I ever did in four years of RE – his ability to mix a super story with page after page of hard fact is so impressive. So I pressed on, down to the crypts, still optimistic even though my feet were beginning to swell. I walked around the catacombs for about an hour, checking every dead pope for a hidden message, possibly left there by Mary Magdalene or one of her and Jesus's kids. It was in vain. By the time I left, my feet were bleeding and I was in the shittest mood of all time. But then I realised: this is what Catholicism is all about! Now I know the pain of Jesus and Sparticus!

Bizarrely, the most important lessons in life are the ones Dan Brown can't teach us. They're the lessons we learn when we strap on the dreaded jaggy garter in a frenzy of self-flagellation, or like the fashion-conscious Roman around town, strap on the diamante Prada flip flops and wait for their crippling powers. This is what makes Roma, Italia the greatest city in the world. 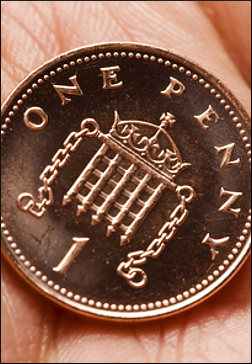 TWENTY pence  is now worth £50, a tenner is worth 12p and a 2p piece is worth about four grand, it was confirmed last night.

Martin Bishop, Coinmaker-in-Chief at the Royal Mint, said it all started when he accidentally made a load of 20ps with no date on.

"The next day some bloke said they were worth fifty quid and, even though it didn't make much sense at the time, no one thought to argue.'

Mervyn King, Governor of the Bank of England, said he had finally decided to give up, adding: "I've bought a guitar and am going to go round the local pubs doing Tom Petty covers."

The sudden, totally random and utterly inexplicable change in the value of money is a boon for those who collect coins or have recently used a fiver to buy some Tic Tacs.

Edie Godley, 82, from Worcester has a large cider bottle completely filled with the small brown coins that used to be worth 1p and 2p each.

She added: "I collect coppers because I am lonely and enjoy taking them to the bank, where I can chat to the teller as she laboriously counts them out, while people stand behind me, calling me a 'manky old shit'.

"But now each two pence piece is worth £800,012 so I have decided to buy Norway and make myself its Queen. It's going to be lovely."

Others, like Dave Stein, a gangster and drug dealer from Chigwell, are less pleased.

"I had just left a major heroin deal with a suitcase full of unmarked fifties. Apparently they're now worth 0.0086p each. I've already spent it all on a Wispa. I'm gutted."