SWINE flu parties for children are exactly as bad as any other party filled with jam-covered little shits fucking-up your widescreen television, doctors said last night.

The British Medical Association said that any parent who was tempted to hold a swine flu party should remember the last birthday party and then smack themselves in the face with a pot for being so stupid.

Britain is now in the slowly tightening grip of a fresh panic after officials upgraded the virus from 'elaborate hoax' to 'about the same as a badger attack'.

Across the UK parents have been throwing parties hoping their children catch the virus before it mutates, as GPs said they may as well pack up and go home as everyone seems happy to be treated by the fucking Daily Express.

Deliberately infecting offspring with a potentially lethal virus is a Victorian invention.

Diarist Lady Monkswell wrote on June 5th 1872: "The summer season moves on apace and I have been much occupied inviting children to young Harold's tuberculosis party. He grows weaker by the hour."

A BMA spokesman said: "It is a good idea if you want two dozen bastards running through your house like a dose of diarrhoea, funnelling Sunny Delight into your BluRay player and experimenting with your cat."

He added: "From what we have been able to determine so far, it does seem to be the same sort of people who believe that MMR jabs will turn their kids into Rain Man. 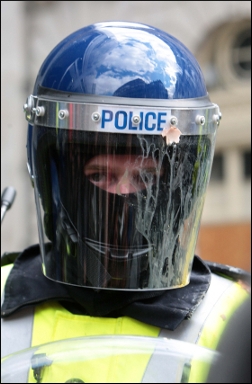 BRITAIN'S police forces have been overrun by idiot, racist vampires, it was claimed last night.

As bags of human blood were discovered in staffroom fridges, vampirologists said every community in Britain was now under threat from rampaging hordes of blood-thirsty morons with tasers and nightsticks.

Dr Wayne Hayes, of Reading University, said: "They are vampires but because they're also policemen it means they're idiot vampires who were too stupid for the army.

"They don't bite people on the neck because they know absolutely nothing about human anatomy.

"It's much easier for them to just beat their victims until blood starts to come out. Then they soak up it with a sponge, squeeze it into a plastic bag and bung it in the fridge."

Dr Hayes said the really stupid vampire policemen are keeping urine and stool samples in the same fridge and then trying to concoct some sort of lunch out of them.

He added: "Despite their racism they are known to enjoy extracting and consuming the blood of black and Asian people because they think it will give them a sense of natural rhythm and the ability to run a successful small business."

The Independent Police Complaints Commission has pledged to hold a full inquiry headed by the fearless vampire hunter Professor Gabriel Van Helsing. The inquiry is expected to last up to three years and could result in a press conference and a handful of strongly worded letters.

Dr Hayes stressed that idiot vampire policemen tend to prey on Brazilian electricians and newspaper sellers, but advised anyone who was worried to fill up on garlic bread and carry a bag full of steaks.

He said: "Wooden stakes are only for traditional vampires. If you wave a sirloin steak in front of a vampire policeman and then throw it, he will chase after it. Like a dog."