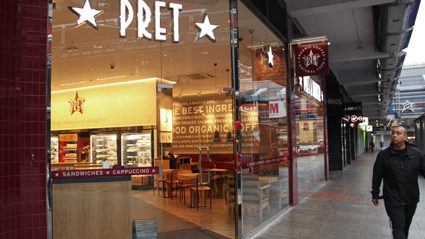 PRET A Manger has announced plans to open its ten millionth London branch by the end of the decade.

Pret currently owns around half of all buildings in the capital, with the rest of them split between Costa, Chicken Cottage, and Foxtons.

A Pret spokesman said: “Some Londoners are living more than four minutes from a Pret, which is shocking and unacceptable. Nobody should have to rely on food they make themselves with their greasy, untrained fingers.

“By 2020, every Pret will be serving hot drinks and snacks to people on their break from working in a different Pret.”

The plans include a rollout of spinoff stores, including Pret a Nursery where children will be entertained with facts about sandwiches.

“I don’t actually like Pret, but the only alternative is to go to a Chicken Cottage or Foxtons and they don’t sell crisps in Foxtons.” CEREAL boxes are to run a competition to finish the sentence ‘Brexit means…what?’, it has emerged.

All major cereal companies will run the government-backed contest, with the prize being a job as the UK’s ambassador to the EU.

A government spokesman said: “This competition is open to patriots of all ages, although winners under 12 will have to be accompanied to work by a parent.

“Get as creative as you like, as far as we’re concerned the answer could be anything. You could submit a detailed 48-page document outlining fiscal policy, or just a nice picture of a lion.

“We will also be giving bonus points for anyone who can finish the sentence, ‘You get Boris Johnson to shut the fuck up by…’”

He added: “This is a serious thing so don’t just go writing ‘massive ballbags’ or something, you’d just be wasting everyone’s time.”

Four-year-old Mary Fisher said: “I think Brexit is a type of dinosaur. Not a cool one though. One of those rubbish fat ones that eats leaves.”