Everything co-workers do is annoying

ABSOLUTELY everything your colleagues do is annoying, it has emerged.

Research by the Institute for Studies into workplace antagonism found that the most common cause of loathing towards colleagues was ‘every single thing they do’.

Sales co-ordinator Nikki Hollis said: “With the woman I sit opposite, I thought it was how she ate her sandwich in a nibbling fashion that got on my tits the most. Then I realised it was also the way she sat, at a slight angle to the desk.

“Then I decided I hated her skirt, her nose, and the way she says ‘fiddlesticks’ after incorrectly entering some data. It gradually dawned on me that I hated everything about her. And I feel the same about every other human in the building.”

Office manager Tom Booker said: “Just look at these fuckers, don’t you just want to slap each and every one of them in turn.

“I wouldn’t murder them because that’s wrong but if I could somehow magic them out of existence that would be really good.”

Men ordered to be ashamed of their bodies 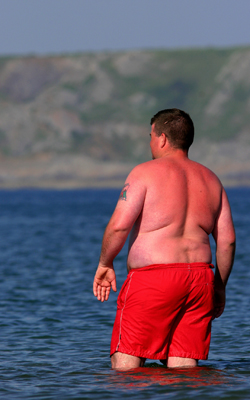 BRITISH men must attend a series of self-hate seminars to increase their body neuroses.

A survey found most men are fine with how they look, triggering concern about the economic impact of unsold cosmetics, diet products and ‘figure-flattering’ trousers.

“The men will be encouraged to compare their own bodies unfavourably to the performers, and then told how much surgery they will need on their buttocks, torsos and penises if they ever wish to have sex again.

“Participants will then be asked to list their favourite foods, and told to draw pictures of those foods and eat them as meal substitutes.

“Then after lunch we look at some pictures of Daniel Craig in magazines.”

Self-hate student Norman Steele said: I was walking around in shorts and t-shirts, with no idea of how repulsive and unpalatable I was.

Now I know the truth, I conduct most of my business in the shadows, outside daylight hours.

“Sometimes I go swimming – I used to do this in Speedos but now I put an extra-large refuse sack over upper body.

This has increased the pool fatality rate, but Id rather someone died than saw the full horror of my physique.