G20 Produces One Trillion Dollars From Behind Your Ear

THE G20 summit made you giggle like a schoolgirl last night after producing a shiny $1 trillion coin from behind your right ear.

At the close of an historic meeting in London, Gordon Brown delighted his fellow world leaders by crouching down asking you if you had any money.

When you frowned and shook your head, the prime minister moved his hand up to your right ear where he produced a big, golden coin before adding: "Really? Well, what do we have here?"

Mr Brown then gave you the coin, patted you on the head and urged you to spend it all on sweets.

But as global markets applauded the miracle of the golden coin, experts urged caution, stressing Mr Brown's playful generosity is what is known in the real world as an 'illuuuusion'.

Tom Logan, of the Institute for Studies, said: "It allows you to carry on spending money on sweets while convincing yourself that you will not, at some point, have to start paying it back. Forever. And ever. And ever.

"I'll be honest with you, we're now in so much debt that if you can summon up the courage to look at your share of it you will scream, faint and shit your pants all at the same time.

"Not only that but the coin does actually belong to some Chinese and Saudi Arabian gentlemen and if they don't get it back they will make you dance naked on a table and turn your house into a bathroom for their racehorses."

He added: "What the coin basically means is that your retirement will last the eight seconds it takes for you to collapse at your work station, fall to the floor and die and up until that point you'll be taxed every time you use the letter 'A'.

An Excellent Day All Round, Say Media, Police And Anarchists 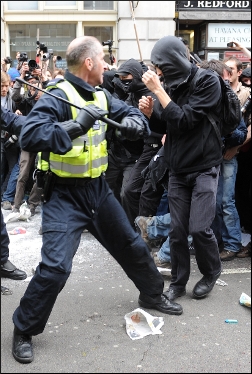 A GATHERING in central London was enjoyed greatly by all who took part, the organisers have confirmed.

The event, in aid of a variety of causes, was judged 'an unqualified success' despite early fears of bad weather and a lack of blood-soaked violence.

But by mid afternoon the sun was shining and the boisterous crowd had begun to engage in a series of good natured clashes with the police as both sides were cheered on by hundreds of jubilant reporters and cameramen.

Mr William McKay, of the media, said: "Everyone was most helpful, particularly the young man who waited very kindly for the photographers to turn up before throwing a computer through the window of the Royal Bank of Scotland.

"I would also like to thank the police for wasting very little time in getting in amongst it."

Mr Julian Cook, of the anarchists, said: "The police were marvellous. The Commissioner and his team worked very hard to make the day such a great success and I can't thank them enough.

"I think we can all look forward to a memorable season of bloody street battles and violent arrests. Weather permitting!"

Meanwhile Mr Thomas Logan, a police constable, added: "It's the first time I have attended a local event such as this, but luckily I got to knock the absolute fuck out of eight hippies. I'm chuffed to bits."

The event was opened by the local celebrity, Mr Russell Brand, who wished everyone a 'splendid day' before inviting any granddaughters over the age of 18 to strip down to their bra and pants and form an orderly queue outside his tent.