Ikea Using Gas That Makes You Forget Your Last Visit

FURNITURE giant Ikea is using memory-wiping gas to make customers forget how awful their visit has been, it was claimed yesterday.

Sources claim the company uses a scentless substance known as Skortl, administered at the checkout area, which obscures customers’ recollection of the horrors they have just experienced in the seemingly endless labyrinth of cheap objects.

Shopper Bill McKay said: “The last time we went to Ikea, I had a cold, but I was determined that our living room would not be fit for human consumption until I had installed a beech-veneered fjrkntruupel.

“As the hours passed – with no sign of the fjrkntruupel or an exit – the trolley filled with increasingly unnecessary items selected through a weird mix of panic and self-doubt until eventually we began to turn on each other.

“I made a deliberately antagonistic comment to my wife about how I’d rather ram broken glass up my own arse than ever ever ever fucking ever do this again, and then she punched me really hard in the windpipe. Meanwhile our eight-year-old son Robert responded by stabbing her repeatedly in the thigh with one of the little pencils they give you.

“Yet no sooner had we left the building, bleeding and ragged, than my wife was talking happily about how we didn’t really need another 47 bags of vanilla flavoured tea lights.

“It was then I remembered being sprayed in the face at the checkout by a yellow-shirted girl who laughed in our faces and called us ‘dreadful, bovine twats’. Clearly they didn’t count on my blocked sinuses.”

A spokesman for Ikea said said the company was pleased to announce the opening of its first British stores and looked forward to introducing millions of customers to a new shopping experience.

Retail analyst Stephen Malley said: “Memory gas doesn’t sound like the kind of thing Ikea would do, but then again I’ve never been there.”

He added: “By the way, can I just ask you something – is your house completely full of tea lights?” 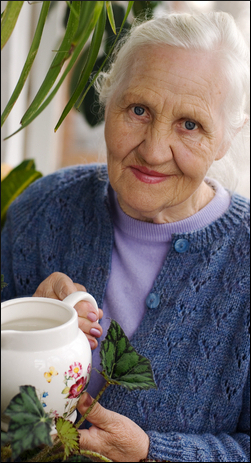 MILLIONS of grandmothers across England are expected to pass away some time tomorrow morning, it has been confirmed.

Personnel departments are bracing themselves for a grandmother holocaust as workers say they need the afternoon off to be with their families and begin to come to terms with the sad death of a sweet natured but feisty old woman, known to everyone simply as ‘nana’.

Tom Logan, an NHS administrator from Stevenage said: “I actually started laying the ground work last week. I saw my line manager heading in my direction, so I picked up my phone and started saying stuff like ‘oh no’ and ‘what do the doctors reckon?’.

“My manager asked if everything was okay and I said that my gran had just had another stroke. And then I said something about her being a ‘tough old bird’ and we both nodded silently. Then he placed his hand briefly on my shoulder and said ‘whatever you need, just let me know’, nodded again and then walked away.

Helen Archer, an accounts assistant from Doncaster said: “My gran has died four times in the last two years. Poor thing. Anyway, this time I’m swithering between ‘long illness’ and ‘attacked by a fox’.

“Long illness is a bit of clichÃ© whereas fox attack is suddenly very believable. And how can I be expected to sit at my desk knowing that my lovely old nana is lying in some mortuary covered in bite marks?”

Martin Bishop, a sales executive from Hatfield, added: “My gran actually died last Friday. The funeral is at 1.30 on Wednesday afternoon and it doesn’t finish until five so I will need the whole afternoon off.

“There is an announcement in the local paper if you want to have a look. But if you could just make sure my gran doesn’t see it, because she will freak out.”