Osborne to use &#163;747m from Northern Rock sale to bail out new owners

GEORGE Osborne will use the £747 million from the sale of Northern Rock to bail it out again sometime next year.

The chancellor said the sale to Virgin Money was a good deal for Britain because it meant the Treasury would not have to find additional funds when the bank is eventually renationalised.

He said: “Some may say that selling a fragile bank at a loss in the midst of a potentially catastrophic debt crisis and with a second credit crunch looming on the horizon is not necessarily a spiffing idea.

“And I would say ‘I have absolutely no idea what any of that means’.”

He added: “But at least we’ll be able to give Virgin their money back when this all goes horribly wrong.

“I’m looking forward to doing the same thing with the Royal Bank of Scotland but on a much bigger and more exciting scale.”

“Also, we could have waited until Northern Rock was worth more than we paid for it but we were really bored of it.”

Julian Cook, chief economist at Donnelly McPartlin said: “I know that having George Osborne in charge of the money makes for great conversation, but eventually we are going to have to take this seriously.” 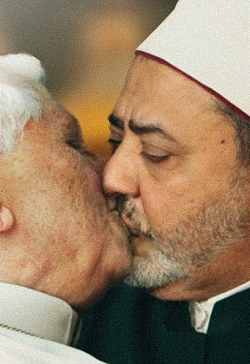 POPE Benedict and Imam Ahmed Mohamed el-Tayeb would be a really horrible couple, it has been confirmed.

The pair were depicted kissing passionately in a Benetton advert, raising the prospect of them getting together to form one big ball of judgemental hate.

Nikki Hollis, a relationship consultant, said: “You’d invite them over and they would sit there making barbed comments about everything until you felt like a total shit.

“They’d finish each other sentences and give each other knowing glances about the food. It would be like having dinner with Richard and Judy.”

She added: “Eventually they wouldn’t have any friends anyway and then they’d just sit in their front room making little lists.”

Meanwhile the Vatican has condemned the advert because it showed the Pope kissing a man who is not a child molester.

A Vatican spokesman said: “This is a clear example of how advertising can violate elementary rules of respect for people. And we wrote the book on violation, so back off.

“And I don’t see how this campaign is supposed to end hatred because I now hate Benetton as much as I hate homosexuals. Advert fail.”

The Islamic world was equally shocked by the advert with street crowds in Pakistan setting fire to a large pile of overpriced jumpers.

Ahmed Kahn said: “Unless Benetton releases a photograph of the Imam beheading the Pope with a gigantic sword, then all their jumpers will die.”