Sports Direct staff ‘were told outside world would kill them’

EMPLOYEES of Sports Direct were encouraged to believe the outside world was a toxic wasteland in which they would quickly perish.

An investigation by MPs discovered that staff thought low pay and oppressive working conditions were preferable to breathing poisonous air and being preyed on by mutated creatures.

Shop assistant Tom Logan said: “My manager said the ‘Time of Fire’ had destroyed human civilisation, so I felt lucky to be putting trainers on shelves for less than the minimum wage.

“I thought it was odd having to live in the shop, but when I heard about the giant cockroaches that dissolve your legs with acid, I was glad to be sleeping under a carrier bag with a football boot for a pillow.

“The customers going in and out didn’t make me suspicious because I was told they were government scientists who’d left their protective suits in their cars.”

Warehouse worker Nikki Hollis said: “Sports Direct are really strict about toilet breaks, but if I’d been forced to join a tribe of scavengers I’d have to use a radioactive hole.”

A Sports Direct spokesman said: “All our staff have read and agree with the company rules, or perhaps they’d rather take their chances with the mutoids in the Cursed Zone?”

Family to get ex-girlfriend’s presents 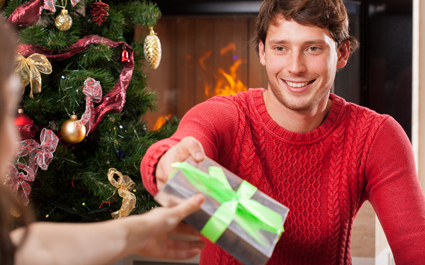 A RECENTLY-DUMPED man plans to save money by giving his ex-girlfriend’s gifts to family members.

After being dumped last week, 23-year-old Tom Booker is to pretend gifts bought for his former girlfriend were carefully selected for various relatives.

He said: “Getting my heart smashing into tiny pieces was obviously bad, but on the plus side all my Christmas shopping is now sorted.

“I’d bought her a ton of stuff and most of it can go to family, apart from the ‘sensual pleasure gel’ which is more of a charity shop thing.

Booker’s sister Sarah said: “He always gets her nice perfume, so that’s got to be heading my way. Maybe she’s not so much of a bitch after all.”

Booker’s father Tony is to receive the Orange is the New Black box set. He said: “I’ve never heard of this programme but apparently it’s about women getting off with each other in prison which sounds fairly interesting.”