BBC Captures Rare Footage Of Fiona Bruce Having A Shit 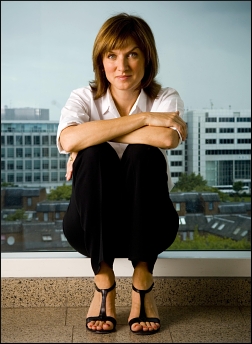 IT is as thick as your arm and smells disgusting – and it has just been caught on camera for what is thought to be the first time.

A crew has managed to record a Fiona Bruce – the BBC's  biggest newsreader – expelling food waste, which was then scooped up for research.

Biologist Tom Logan said the sample had helped him to discover more about the giant creature's feeding habits.

Fiona Bruces (Antiquodon Roadshowius) are related to Anna Fords, but are far less fearsome. They are filter feeders, swimming about with their enormous mouths open to scoop up tasty morsels floating in their paths.

They can grow up to 12m long; yet, despite their staggering size, very little is known about these newsreading giants. Dr Logan added: "It does seem rather weird, someone being so excited about seeing Fiona Bruce poo. I'm pretty certain that this is the first time it has been filmed.

"But it is pretty rare – they are usually doing their business down in much deeper water." He described the faeces that the team collected as "scientific gold".

"One way to work out what is going in one end is to look at what is coming out of the other.

"By seeing a Fiona Bruce poo and getting hold of some of that stuff, we can use sophisticated genetic techniques to look at the DNA in that sample to find out exactly what those animals have been eating."

Genetic analysis revealed the Fiona Bruce had been feasting on red crab larvae and bits of Sophie Raworth.