BRIAN Thompson, the Grantham butcher who set up a website, has been chosen as ‘Man of the Year’ by Butcher and Meat Wholesaler magazine.

The presitigous trade journal cited Thompson’s uncompromising use of information technology to bring a new level of synchronised interconnecitivity to almost one in eight of the population of the Lincolnshire market town.

Editor, Martin Bishop, said: “Brian Thompson has wired together a twelfth of Grantham into a single meat network, creating a beef and pork-based social entity almost twice the size of Caythorpe.

“We have entered the thompsonandsons.co.uk age and Brian Thompson is the man who brought us here.”

But Thompson’s accolade provoked online fury after the readers’ vote was won comfortably by Ian Blackmore.

Meanwhile others insisted it didn’t matter because it was just some fucking magazine read by a load of ponces who think they’re better than you.

Tom Logan, a Blackmore voter, said: “This is about money versus freedom. Ian was giving away beef cheeks for next to nothing, just so people could see what they tasted like. He’s the butcher who upset the apple cart.”

But Martin Bishop insisted: “More people eat meat than, say, use one of the non-meat based social networks like Facebook, ergo Brian Thompson must be more important than Mark Zuckerberg.

Post office could close unless elderly man moves away from counter 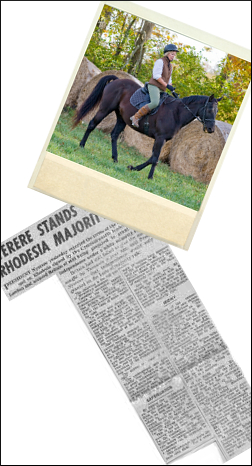 A POST office could be forced to close unless 83-year-old Roy Hobbs accepts that he doesn’t have the correct documents to renew his car tax.

Hobbs has been standing at the counter in the Gloucestershire village of Tetbury for seven weeks now, shoving an article about Rhodesia and a Polaroid photo of a woman on a horse at a succession of hate-filled staff.

Repeated attempts to tell him he needs his MOT and insurance certificate if he wants to tax his 1989 Ford Fiesta Ghia have failed and it now seems that Hobbs will be there until he dies.

Plumber Nathan Muir, who just wants some fucking stamps, said: “I know he was probably in the war and everything but can’t we just pick him up with a forklift?

“He may actually be dead, he’s leaning pretty heavily against the counter and I don’t see any breath steaming up the glass.

“I don’t know how long I’ve been here but I’m standing next to the paperbacks and I’ve managed to read Doctor of My Heart, The Ambassador’s Mistress and another one about a dishy vet.”

Over the past year more than 80 post offices have closed because of customers’ inability to complete their transactions and just piss off.

A branch near Telford was forced to close after heroin addict Stephen Malley spent over a month trying to get staff to explain his benefit application form, while Malmesbury lost its post office after retired headteacher Margaret Gerving brought in a collection of 1p and 2p coins with a total value of Â£67,899,540 and 28 pence.