ALEXANDRA Burke will this morning begin a glamorous new life of cover versions, Heat magazine stories about her fat eyelids and being offered £250 to open the Macclesfield Glen retail and leisure park.

Now agents, magazine editors and property developers are clamouring for her signature as she embarks on a glittering showbiz career expected to last about seven and a half weeks.

Her first single, destined to be the Christmas number one in both Britain and Azerbaijan, will be a cover version of Leonard Cohen's That Song They Play When Someone Dies in a Television Programme.

Burke, described by Cherly Cole as an 'angel-voiced angel with the voice of an angel', has already signed a multi-hundred pound deal to perform the official closing ceremony at more than 200 branches of Woolworths, as long as they throw in a tortilla wrap and a raspberry smoothie.

Last night her defeated opponents, boy band JSL, were being broken up and used for soup, while Egoggegan the Bouncing Leprechaun has been signed-up by impresario Louis Walsh who will parade him around Ireland in a cage.

Walsh has built a multi-million pound fortune touring the rural fairgrounds of the Emerald Isle with legendary acts such as Upside Down O'Reilly, the Flying Flannagans and Westlife, the gay babies of Boyzone and Take That.

Iraq Had Shoes All Along, Claims Vindicated Bush 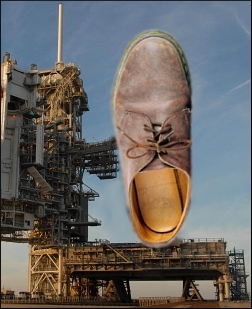 PRESIDENT Bush last night claimed his decision to invade Iraq had been vindicated after US troops uncovered an arsenal of shoes on the outskirts of Fallujah.

More than 400 lethal shoes including sandals, pumps, desert boots and a solitary brogue were revealed as Mr Bush paid a final visit to Iraq to see if there was anything left.

A White House spokesman immediately dismissed claims the US invasion had been based on Saddam Hussein's alleged stockpile of chemical and biological weapons, adding: "No we didn't, we said shoes.

"We did and if you heard weapons of mass destruction, that's your problem. You might want to try using a cotton bud."

The spokesman added: "We believe that many of these shoes would have been built in China with Russian laces, French-made heels and odour-absorbing insoles purchased through back channels via the west African state of Niger."

Prime minister Gordon Brown backed Mr Bush insisting many of Iraq's shoes were slip-ons that could activated in less than 45 minutes.

But France denied supplying Iraq with shoe components insisting its only exports to Saddam's regime had been a 1994 shipment of humanitarian espadrilles.

Meanwhile the Kremlin said most of Iraq's shoes had actually been bought from ex-US defence secretary Donald Rumsfeld when he worked for Hush Puppies in the early 1980s.