Christian Bale stuck in character as himself

CHRISTIAN Bale has become permanently stuck in character as a gifted yet pretentious actor.

Famed for his intense commitment to method acting, Bale lost three quarters of his body weight for The Machinist and killed eight people ahead of American Psycho.

Bale adopted the persona of an intense, brooding, self-important actor wedded to his craft several years ago and remains firmly ensconced in that role.

Hes constantly referring to himself as a canvas or asking about his motivation using the third person when all Ive asked him is if hell pass the Pringles.

I know that Christian really wants to do this role justice and I really sympathise with that, but itd also be nice if he could be less of a bell end.”

Bale recently declined a major role as a successful actor who is able to laugh at himself.

He has since had his feet amputated and replaced by hooves to portray Mr Tumnus in a screen version of The Chronicles of Narnia. 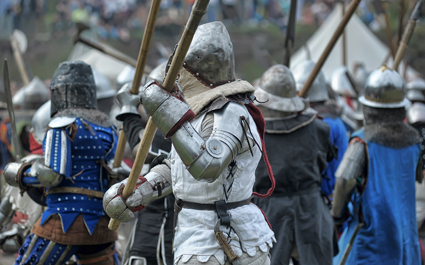 OVER 5,000 people have been killed in a faithful re-enactment of the Battle of Bannockburn.

Several hundred more fatalities are expected over the next few days, as survivors succumb to gangrene and dysentery.

History enthusiasts descended on Stirling to commemorate the battle’s seven hundredth anniversary by dressing in medieval costumes, getting tanked up on mead, and hacking one another to death.

“I love learning about early fourteenth-century battle tactics, and then using that knowledge to stab people with pikes in a historically accurate way.”

Spectator Emma Bradford said: “We put a helmet on my youngest and let her stab a wounded longbowman in the throat, which beats another Dora the Explorer marathon all ends up.”