FELIX Baumgartner has one serious pair of balls, according to Death.

Death said: “When I first heard about his plan, my first thought was ‘how annoying, that Sunday’s reaping diary is already packed’.

“But I’m damned if he didn’t pull it off. That’s a seriously fucking hardcore mortal.”

Scotland to be offered independence or sugary snack 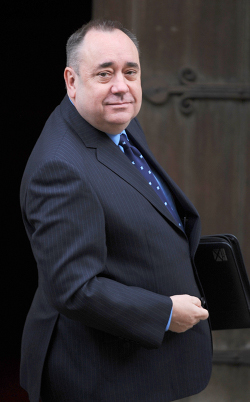 SCOTLAND’S referendum will offer the country a choice between independence or some delicious confectionery.

David Cameron and Alex Salmond, Scotland’s roly-poly first minister, will today sign a historic agreement that will lead to either the end of the union or millions of chocolate-covered faces.

After months of tense negotiations the UK and Scottish governments have agreed the terms of the referendum, which worried Tories have warned could lead to them having a permanent majority in England.

But it is the definition of ‘snack’ which proved the biggest obstacle to an agreement, with the UK insisting a Creme Egg would be sufficient while officials in Edinburgh initially suggested a 14 foot-long Swiss roll.

The referendum will now ask: “Do you want Scotland to be independent or would you like a Star Bar?”

Julian Cook, professor of pointless questions at Roehampton University, said: “There was a long, bitter argument  about whether the snack should be sweet or savoury.

“Whitehall made a derisory offer of some Wotsits, while the SNP pushed for a ‘bridie’, which is a Scottish version of a Cornish pasty that refuses to acknowledge the existence of vegetables and is made of hamsters.

“Eventually both sides found they were able to move forward on the basis of sugary goo.”

Cook added: “Cameron does seem to have won a tactical victory by granting the vote to thousands of fat Scottish teenagers.”

Meanwhile, research suggests that an independent Scotland will just spend all of its oil money on crisps and chocolate within the first month.