Everyone To Run Everything By Stephen Fry

EVERYONE is to run everything by Stephen Fry first just to make sure it's okay, it was confirmed last night.

As Daily Mail columnist Jan Moir was torn apart and devoured by three of Mr Fry's favourite snow leopards, corporations and government departments, as well as millions of terrified individuals, have subscribed to his online approval service via TwitPiss.

Emma Bradford, a sales manager from Hatfield, said: "The last thing anyone wants is to be thought of as the sort of person Stephen wouldn't invite to his lovely Norfolk home for the weekend along with Richard Dawkins, Emma Thompson and Alan Davies.

"I always imagine how funny it would be if Alan Davies said something really obvious about the thing we had all been talking about and then Stephen would ring a little bell and we would all point at him and go 'Oh Alan!'"

Meanwhile David Cameron, a 43 year-old leader of the Conservative Party from Oxfordshire, said: "I have just sent Stephen my list of thoughts and actions for today. Fingers crossed!"

But Bill McKay, an architect from Grantham, said: "There's a very long queue at the Stephen Fry window so I'm going to send my thoughts and actions to David Mitchell.

"And if he's full-up I suppose I'll have to try that Charlie Brooker instead."

Margaret Gerving, a retired headmistress from Surrey, added: "Stephen does not approve of my brand of tea so I'm going to have to do something about that, but he did say he was 'deliciously proud' that I had chosen Direct Line for my horse insurance.

"And I've also written a blog about how all the homos want to fuck everybody to death. Hopefully he won't be too cross!" 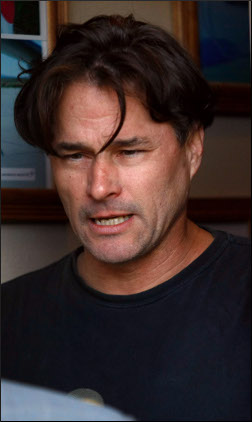 Federal investigators say Richard Heene's claim that his six year-old son Falcon was trapped in a runaway balloon was such an obvious hoax that it must itself be part of a slightly larger hoax.

The FBI believes Mr Heene and his wife and children planned the hoax balloon hoax in the hope of hoaxing the local police into believing that it was a genuine balloon hoax.

"You have the initial panic, followed by police suspicions, followed by charges, followed by a fantastic court case, as opposed to a runaway balloon, possibly containing a small child, which everyone loses interest in after a week.

"If the fake hoax had been successful then a year from now you might get a few people asking 'whatever happened to the kid in the runaway balloon?' instead of millions of people saying  'I cannot wait for the runaway balloon hoax trial to start'."

The spokesman added: "The local sheriff has suggested Mr Heene staged a genuine hoax in a bid to generate publicity and get his own reality TV show, but what the sheriff fails to understand is that because Mr Heene has appeared on television for more than five minutes he will get his TV show regardless of whether it had been real, a hoax or a fake hoax.

"And there is nothing that can now stop this from happening."