JORDAN and Peter Andre were yesterday granted a 'quickie' interview and photoshoot deal with Okay! magazine.

A High Court judge said it was in the interests of both parties that the end of their pretend marriage be covered in page after page of full colour photographs and dramatic pull-out quotes.

Although neither was present for the hearing, both were represented by legal teams screaming obscene curses at each other on their behalf.

A spokesman for Andre said: "The deal includes a 200-word sidebar about how Peter is getting back to normal and returning to his daily routine of inventing strange new words and doing loads and loads of sit-ups on a sunbed."

Meanwhile Jordan is understood to be relieved that the article will not be dragged out over months as she has to devote time to finding someone to write her next book.

Her spokesman said: "Articles about divorce are never easy, but she really wants people to know that she has put the past behind her and is finally moving on with her nipples."

The pretend marriage fell apart earlier this year after one of the imaginary horses inside Jordan's head accused Andre of looking at a picture of a woman in a magazine whilst smiling. She immediately responded by running him over in her Humvee and posting two Ultimate Fighters at the entrance to her vulva.

Okay! reader Nikki Hollis said: "I can't wait to see pictures of their palatial child visitation room and glamorous divorce counselling sessions. Sometimes I look at my own life and cry until my throat's raw." 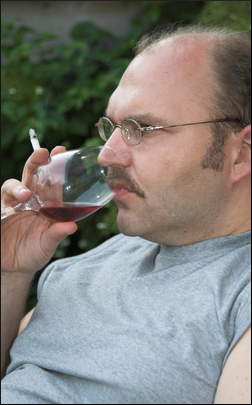 A CONSOLE game based on the Beatles is heralding a new wave in interactive mid-life crises for balding, insecure GQ readers, it was claimed last night.

Software firms have unveiled a series of desperately sad titles for the mid-40s male market, including an 'emotions-based platform game' inspired by the novels of Tony Parsons, and Time Team 3D Archaeological Dig, which comes in a limited edition presentation box with a lock of Tony Robinson's ear hair.

"Yet these are the kind of people who'll fork out a grand on a 'collector's edition' U2 vinyl box set with an 'individually numbered' hologram of Bono's magic testicle in the wildly misguided belief that it might somehow make teenage girls want to sleep with them."

He added: "'They have now reached a stage in their lives where they are basically eight year-old children with Barclaycards."

In Tony Parsons' Legend of the Male Menopause for the PS3, players accumulate 'sensitivity points' for doing thoughtful things for their in-game 'life partners' with the ultimate mission of balancing fatherhood and fashionable footwear.

Greg Watson, a 46 year-old advertising account manager from London, said: "It's so great that there are finally games coming out for men who like to listen to Robert Elms while eating brioche."

But his 13-year-old son Jonas disagreed: "These games are fucking gay and retarded and make me hate my father even more than I already did, as if that was possible.

"The Beatles game is the worst. When I see my dad and his annoying, fat, hairy workmates fumbling the chords to Hey Jude on tiny multi-coloured plastic guitars, I want to just buy him a t-shirt that says 'my cock doesn't work anymore'."

He added: "But at least it distracts his attention from my raging smack habit. Swings and roundabouts."